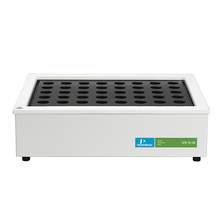 The SPB series of block digestion systems include graphite blocks that are PTFE-coated to resist aggressive corrosive attack for guaranteed long life in harsh laboratory environments.

Toxic elements, such as lead (Pb) and cadmium (Cd), are entering the food chain through environmental contamination. Rice, as the most widely consumed cereal grain in Asia, can quickly pick up Pb and Cd from soil, thereby seriously endangering human health through diet. These toxic element levels need to be carefully monitored. Maximum levels of Pb and Cd are strictly regulated in Asian countries, especially in China; therefore, it is extremely important to develop a simple, reliable method for trace levels of Pb and Cd in rice. The allowable maximum levels of Pb and Cd in grains in EU and China are required to be below 0.2 mg/kg (Commission Regulation EC 1881/2006 and Chinese GB 2715-2016 Hygienic Standard). Graphite furnace atomic absorption spectroscopy (GFAAS) is the officially recommended technique for detection of trace elements in various food stuffs (GB/T 5009.15-2017, GB/T 5009. 12-2017 and EN 14083:2003). Food samples are usually pretreated before GFAAS analysis using various methods: microwave digestion, hot block digestion, dry ashing, and hot plate digestion. These conventional digestion procedures are usually complicated and time-consuming (2-4 hours or longer). Plus, they require large quantities of corrosive and oxidizing reagents, increasing the chance for contamination which could lead to inaccurate results. However, fast digestion can effectively speed up the sample preparation procedure while reducing the use of corrosive reagents and the chance for contamination.

Lead (Pb) and cadmium (Cd) are common pollutants in grains and are extremely toxic. Pb is harmful to human organs even at trace levels, and once it accumulates in the body, it causes inhibition of hemoglobin formation and neurological disorders. Cd is even classified as human carcinogen [Group 1 - according to International Agency for Research on Cancer]. It is reported that Cd leads to severe kidney problems which can be fatal and is also associated with brittle bones and liver problems. Rice, as the most widely consumed cereal grain in Asia/China, can quickly pick up Pb and Cd from toxins, pesticides and fertilizers in the soil, thereby endangering the health of millions of people through their diet. Therefore, it is extremely important to develop a simple, reliable method to monitor the levels of Pb and Cd in rice. According to Chinese national standard GB 2715-2016 Hygienic Standard for Grain, the maximum concentrations of Pb or Cd in grains must be below 0.2 mg/kg; the allowable level in the European Union is the same [EC 1881/2006]. The official technique for the determination of heavy metals in both cases is graphite furnace atomic absorption spectroscopy (GFAAS, GB/T 5009. 12-2017, GB/T 5009-2017. 15 and EN 14083:2003). Samples can be pretreated using various methods, including microwave digestion, hot block digestion, dry ashing, and hot plate digestion. It is found that these conventional digestion procedures are always complicated and time-consuming (two-four hours or even longer). Plus, conventional sample preparation techniques require large quantities of corrosive and oxidizing reagents, increasing the chance for contamination which could lead to inaccurate results. Special PTFE vessels are needed for microwave digestion; however, reusable utensils might also cause cross contamination.