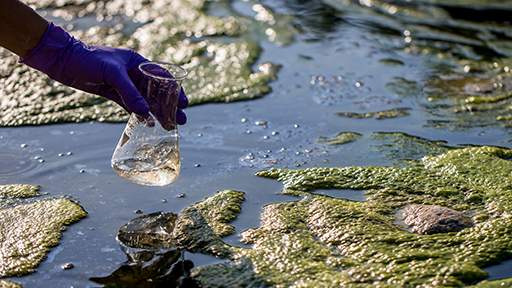 Toxic cyanobacterial blooms were reported worldwide in various aquatic systems, including freshwater rivers, lakes, reservoirs, and eutrophied coastal marine habitats. Cyanobacterial blooms might be caused by a combination of multiple factors, including eutrophication, solar radiation, temperature, current patterns and other associated factors. Their proliferation in aquatic environments can cause death or toxin accumulation in aquatic animals and then, indirectly or directly, affect human health. Microcystis aeruginosa (M. aeruginosa) bloom is the most common harmful algal bloom (HAB) and is widely studied in various fields.

Copper sulfate is an algaecide frequently used for controlling algae growth. The mechanism of copper (Cu)-based algaecide for algal bloom control is not well understood. The amount of Cu required to kill an individual algae cell and the morphology of the cell after being killed is still unknown. Quantification measurement of these phenomena is even more difficult due to the lack of appropriate methodology.

This work demonstrates that single cell (SC)-ICP-MS provides an effective method for the determination of copper algaecide at the cellular level, leveraging the NexION® ICP-MS with Syngistix™ Single Cell Application software module.