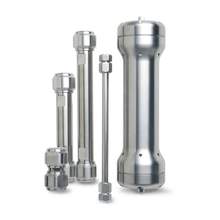 Epic™ C18 is a highly inert phase due to its superior base deactivation. As a result of the high-density bonding levels (> 4 µmol/m2), Epic C18 demonstrates superior peak shapes for the most demanding applications. This phase provides exceptional peak shape and selectivity over a wide range of compounds and pH and is the workhorse HPLC and UHPLC phase for RP small molecule analysis. It can be used with basic, neutral and acidic analytes.

The Epic™ line our latest range of LC columns, based on high density monomerically bonded phases produced through a proprietary bonding process. Epic HPLC and UHPLC columns are compatible with a wide range of organic modifiers and buffers and stable over a wide pH range. All Epic products use an ultra-high purity metal free silica and undergo strict quality control testing. For flexibility, we offer a wide range of column sizes as well being fully scalable from analytical to preparative dimensions.

Eriobotrya japonica leaf is included in the Chinese Pharmacopoeia and is widely used as a medicinal material in traditional treatment of a variety of chronic diseases in China and other East Asian countries. Phytochemical investigations showed that its main components are essential oil, triterpenes, sesquiterpenes, flavonoids, tannins, and megastigmane glycosides. Among them, triterpene acids are considered as the key pharmacological components. To date, more than twenty triterpene acids in Eriobotrya japonica leaf have been identified, including the major four triterpene acids, that is, ursonic acid, corosolic acid, oleanolic acid, and maslinic acid, which belong to ursane type and oleanane type.

In the 2020 Edition of the Chinese Pharmacopeia, two marker compounds, oleanolic acid and ursonic acid are assayed by using an HPLC-UV method, which is important for quality control of this traditional Chinese medicine (TCM).