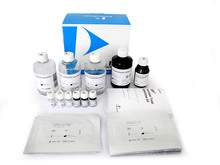 The GSP® Neonatal Total Galactose (TGAL) assay is intended for the quantitative determination of both galactose and galactose-1-phosphate in blood specimens dried on filter paper. The assay is used with the GSP® instrument as an aid in screening for deficiency in any of the three enzymes involved in galactose metabolism.

Galactosemia is an inherited disorder caused by a deficiency of one of three enzymes responsible for the metabolism of a-D-galactose. If not diagnosed and treated within the newborn period, it can lead to diarrhea, dehydration, jaundice, hepatic failure, hypoglycemia, cataracts, developmental retardation, and death within a few weeks. Treatment of the disease consists of withdrawal of all foods containing lactose and galactose from the diet.

The GSP Neonatal Total Galactose kit makes use of a fluorescent galactose oxidase method. The assay measures total galactose, i.e. both galactose and galactose-1-phosphate. The illustration summarizes the reactions that occur during the test procedure. The fluorescence is measured using an excitation wavelength of 505 nm and an emission wavelength of 580 nm.

All PerkinElmer neonatal products may not be available in all countries. 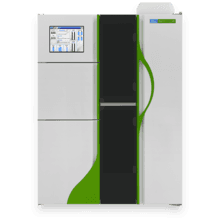