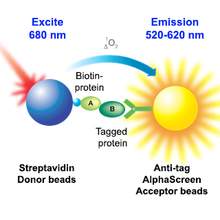 In a typical AlphaScreen assay, one biomolecule of interested is biotinylated and associates with the Streptavidin-coated Donor beads. The other biomolecule is FITC-tagged, and associates with the AlphaScreen anti-FITC Acceptor beads. If the two biomolecules bind to each other, the Donor and Acceptor beads are brought into proximity. Excitation of the Donor beads causes the release of singlet oxygen, which diffuses and triggers the emission of light from the Acceptor beads when in proximity. The amount of light is directly proportional to the degree of interaction. Competition formats are also possible, using the biotinylated FITC probe provided in the kit.