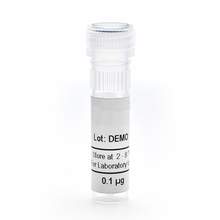 This is a replacement for AL516.

Mouse C-C Motif Chemokine 5 (CCL5), also known as Regulated upon Activation, Normal T cell Expressed and Secreted (RANTES), is an 8 kDa protein that plays a primary role in the inflammatory immune response. Human CCL5 binds to C-C chemokine receptor (CCR) types 1, 3, and 5. CCL5 dimerization and oligomerization, as well as binding to glycosaminoglycan, are key elements of cell recruitment in the inflammation process. CCL5 is a potent chemoattractant for a number of different cell types, particularly eosinophils, basophils, and mononuclear cells. CCL5 is a potential biomarker for several diseases, for example, it can be useful for indicating the magnitude of asthmatic airway inflammation. In addition to its roles as an important biomarker, CCL5 is studied for its interaction with its receptor, CCR5, in HIV research.

AlphaLISA® technology allows the detection of molecules of interest in a no-wash, highly sensitive, quantitative assay. In an AlphaLISA assay, a biotinylated anti-analyte antibody binds to the Streptavidin-coated Donor beads while another anti-analyte antibody is conjugated to AlphaLISA Acceptor beads. In the presence of the analyte, the beads come into close proximity. The excitation of the Donor beads causes the release of singlet oxygen molecules that triggers a cascade of energy transfer in the Acceptor beads, resulting in a sharp peak of light emission at 615 nm.