AlphaLISA® Acceptor beads conjugated to an antibody against O-linked n-acetylglucosamine (O-linked GlcNAc). These beads can be used for AlphaLISA no-wash assays.

The anti-O-linked GlcNAc AlphaLISA Acceptor beads were used for the development and optimization of an O-GlcNAc hydrolase (OGA) assay using a biotinylated Tau-derived peptide O-GlcNAcylated at Ser400 as substrate. A technical notes describing the assay is available in our product literature. 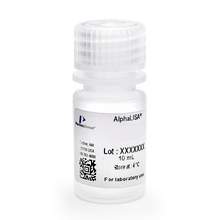