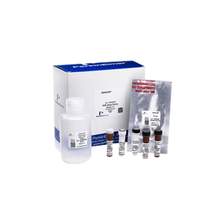 Amyloid beta (Aß) is a short peptide derived from the proteolysis of a larger transmembrane molecule, the amyloid precursor protein (APP). The ß- and ?-secretases cleave the respective N- and C-terminal ends of the Aß sequence, liberating the Aß peptide from APP. Aß40 is the major species of Aß produced by neurons and other cells, and accounts for over 70% of total Aß produced, while the remaining is comprised of the longer Aß42, and other species ranging from 36 to 43 amino acids. Aß42 has a greater propensity to form aggregates or fibrils and also has a greater neuronal toxicity in tissue culture models than Aß40, implying that Aß42 is a more important factor in Alzheimer's disease (AD) pathogenesis and plaque formation. Levels of Aß42 in cerebrospinal fluid are decreased in the majority of AD subjects (probably due to its aggregation into plaques), making it an important biomarker for this disease.