Many labs are now exploring miRNA profile changes in neurodegeneration in an effort to develop early or preclinical signatures for dementia-related disorders, which are a growing healthcare and social concern. Dr. Brigid Ryan shares her insights and the research collaboration among scientists working to find better diagnostic and therapeutic strategies.

"I had to wait 110 years to become famous." These were the words from Jeanne Louise Calment (1875 – 1997), who – though with plenty of controversy – still holds the title of the oldest documented living human before passing at a ripe age of 122 years old. With the advancement of modern medicine and advocacy for healthy living, we are living longer; the global population aged 60 and over was 962 million in 2017, twice as that of 1980. The global population over 80 is projected to increase three-fold between 2017 and 20501.

As the world population ages, neurodegenerative disease prevalence is also expected to rise. The number of Americans with Alzheimer’s or other dementias is anticipated to go from 55 million to 88 million from 2019 to 20552. Neurodegenerative diseases cover a broad spectrum of ailments, including Alzheimer’s, Parkinson’s, and Huntington’s, and Amyotrophic Lateral Sclerosis (ALS), mostly thought to be due to the aggregations of specific proteins in the brain. Several publications exist that discuss potential overlap of genetic elements and molecular mechanisms within the umbrella of neurodegenerative diseases, but most have looked at GWAS studies at the DNA level3-5.

Yet, many have started to turn their attention to small RNAs, particularly miRNAs for their potential role in neurodegenerative disorders as another layer of regulators of cellular and system processes such as in brain development and plasticity because of their well-known abundance in the central nervous system6,7. Plasma miRNAs are also popular for their stability and relative ease of sample procurement and as such make ideal candidates for diagnosis and screening of disease progression8,9.

In his 2019 GenomeWebinar, Dr. Salzman from Gatehouse Bio describes how they are illuminating small RNA signatures for various disease applications including neurodegenerative diseases using their Srnalytics® platform to translate biological and data-driven insight into new therapeutics and CDx through various partnerships. He notes, "Small RNAs are the key. They are master regulators of gene expression. We know that dysregulation of this class of genes can both transform and maintain disease states".

The aggregation of Tau proteins is a common phenotype observable in several neurodegenerative disorders, including Alzheimer’s. Furthermore, these aggregates are thought to act as seeds by which the negative consequences – usually cell death – extend across neural tissues. Several screening assays for Tau aggregation exist, which rely on HTRF technology for time-resolved detection and determination of the efficacy of potential anti-Tau antibodies that could potentially become therapies one day10,11.

As therapeutic advances are made in clinical research for taupathies or amyloidosis, actionable biomarker profiles are becoming more and more critical. Studies have shown that specific miRNAs are dysregulated in post-mortem brain tissues for various tauopathies, and that in Alzheimer’s disease, these alterations are observed in both brain and circulating fluids12, 13. 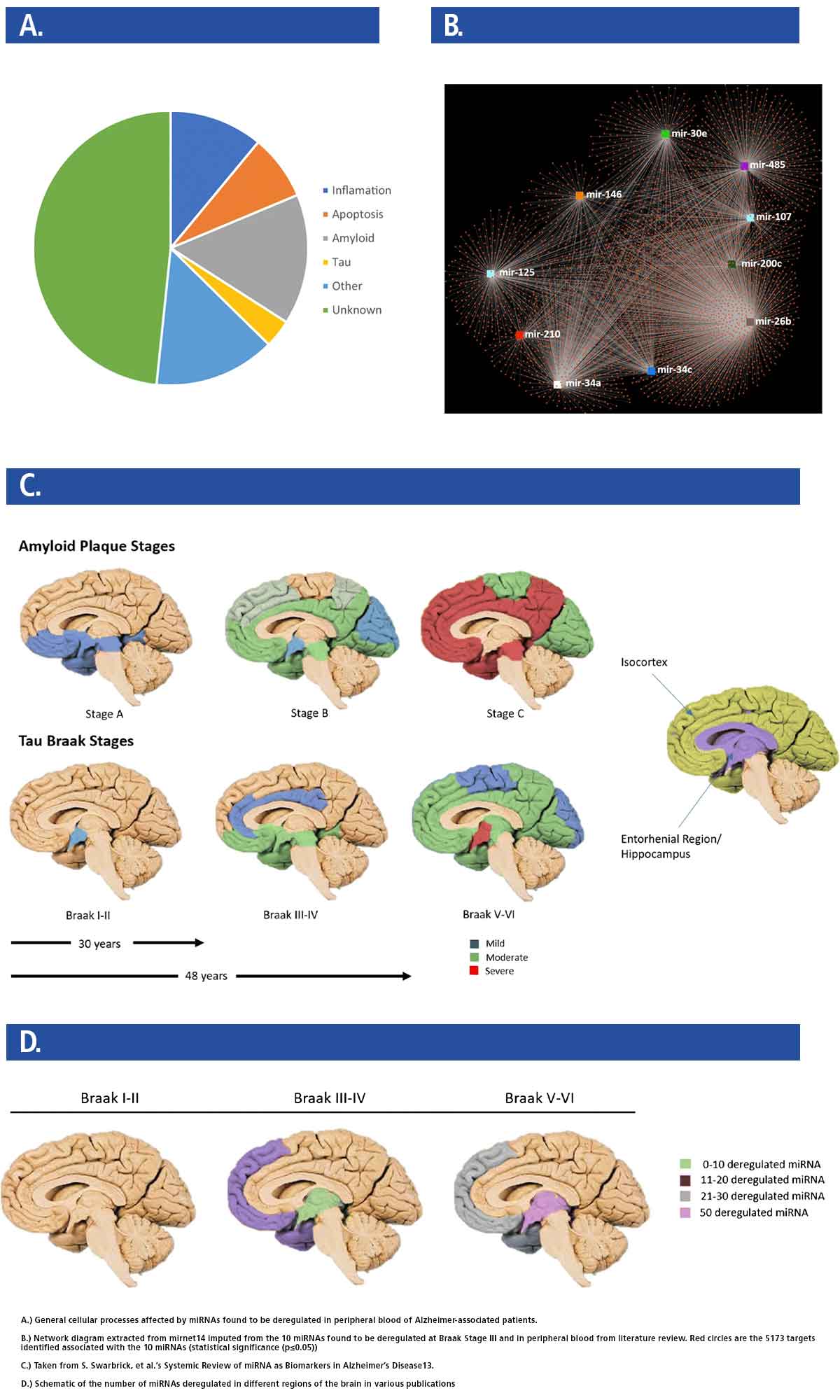 Small RNA-sequencing as a discovery tool for miRNA biomarker profiling

Several publications discuss the potential role of small RNAs as a biomarker for disease stage classification. In a Neuroscience publication in 2019, Dr. Ryan’s team profiled circulating miRNAs for potential pre-symptomatic biomarkers in a genetic mouse model of primary tauopathy (hTau) that utilized small RNA-sequencing to investigate the plasma miRNA profiles in a mouse model of Tauopathy, with the goal of better characterizing potential biomarkers for neurodegenerative diseases at the pre-symptomatic stages of disease.

Several investigators are turning to next-generation sequencing (NGS) for miRNA discovery because of the technology’s ability to discover all the different isoforms of the various miRNAs, which would have been immensely challenging for primer-design based technologies, such as RT-qPCR or microarrays. Current disease stage biomarkers rely on imaging or atrophy scores that are a result of damaged brain cells and cell death; similarly, there is continued ongoing efforts of using in vivo optical imaging animal models to study neurodegenerative disease progression15.

These methods, however, focus on the phenotype rather than assessment of pre-symptomatic or prognostic disease progression. This study identified several miRNAs that could differentiate tauopathic mice compared to healthy controls by employing small RNA sequencing technology for biomarker discovery prior to disease phenotype onset16.

Upon analyzing target pathways of the three dysregulated miRNAs in pre-symptomatic mice in silico via the miRSystem database, authors highlighted the mTOR, MAPK, Wnt, and T-cell receptor pathways from the 211 genes targeted by all three miRNAs.

Interestingly, the circulating miRNA profiles were different to those associated with amyloidosis17. They concluded that though further confirmation of these preliminary findings was necessary, having small RNA biomarkers at pre-symptomatic phases may help increase the effectiveness of potential medical and preventative interventions.

In summary, as the field of biomarker discovery extends past standard DNA sequences via genome-wide association studies, small RNAs are expected to take center stage as perhaps the missing link that can further disentangle the science behind neurodegenerative diseases such as Alzheimer’s to aid in precision medicine as we face the anticipated growth of an aging population.