Alzheimer’s disease (AD) is anticipated to become a heavy burden on the healthcare infrastructure as the world faces an aging population. Current diagnosis relies mainly on gauging cerebral decline such as mild cognitive impairments (MCI) and suspect symptoms, though they may overlap with other neurodegenerative diseases with shared features such as dementia; inevitable, at this point in time, there is usually permanent brain damage already underway.

Researchers and clinicians are working diligently on strategies and technological advances that would allow early detection of disease biomarkers of AD. Neuroimaging has been a tool used extensively in the field of AD, in which molecular imaging detecting biological markers such as β-amyloids and tau has become one of the most vigorous investigational areas, though both structural and functional imaging looking at brain shrinkage or decreased brain cell activity via FDG-PET- determined glucose-intake are still used to rule out other conditions affecting the brain1.

Near-infrared (NIR) fluorescence molecular probes have also been previously employed and shown to be effective in some applications of brain imaging in the past. Indocyanine- Green (ICG) is a near-infrared fluorophore typically used for angiography, though a novel application is currently being explored using Second Window ICG (SWIG) for fluorescence guided surgery (FGS) of brain tumors for utility in gross total- resection (GTR) rate improvements as well as supplemental technique to confirm abnormal tissue collection in stereotactic biopsies. NIR fluorescence, compared to some other fluorescence- or nuclear-based probes, help overcome several imaging hurdles, including unwanted fluorescence in the visible-light range, more limited tissue penetrance, significant auto-fluorescence or light scattering2.

For the present study, Dr. Mengchao Cui, from Key Laboratory of Radiopharmaceuticals, Ministry of Education, College of Chemistry, Beijing Normal University, Beijing, and his colleagues have been exploring the utility of a dual-imaging approach for NIR probes in early non-invasive diagnosis of Alzheimer’s disease (AD), where β-amyloid (Aβ) aggregates – a main component of senile plaques (SPs) – and atypical Tau protein aggregates – found in neurofibrillary tangles (NFTs) – were established by the community as a biomarker-based diagnostic criteria for intervention within an ATN framework (Aβ deposits, Tau pathology, and neurodegeneration)3. Dr. Cui commented, “The early noninvasive diagnosis of Alzheimer’s disease targeted β-amyloid (Aβ) plaques or Tau tangles is a major challenge because of the co-shared β-sheet structure of the target.” 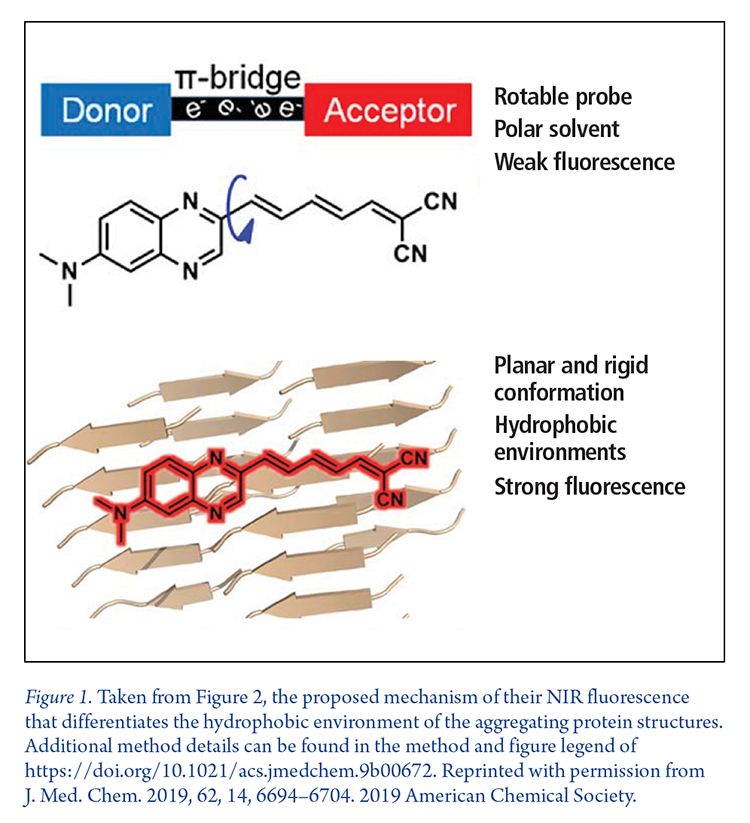 In their mice model, they evaluated both in vitro and in vivo, a confirmation- and environment-sensitive NIR fluorophore that can detect both Aβ plaques and NFTs at the same time by its sensitivity to differences in structure and interior hydrophobic environments of the β-sheets that elicits distinct degrees of the blueshift (Figure 1). Importantly, the emission maxima of the compound upon interaction with these aggregates remains within the NIR region, thus retaining its efficacy for in vivo applications.

Using in vitro triple fluorescence staining on brain slices from both transgenic mice models and AD patients with either Tau or Aβ aggregates, authors showed robust overlap of their NIR compound with traditional dyes of Th-S (for Aβ plaques) or AT8 antibodies (for NFTs) in images also stained for DAPI. For Tau tangles, the new compound labelled more of the Tau tangles than the standard AT8 antibody, which may be accounted for by the fact that AT8 reacts with phosphorylation sites of Tau.

In addition, high-resolution fluorescent staining and emission spectra were also visualized (Figure 2). They observed that the emission maxima when bound to Aβ plaques were shorter in wavelength than Tau tangles. Subtle differences, including shifts in wavelengths, were observed in these in vitro and transgenic mice models versus human brain samples, suggesting the microenvironment and structure differences of synthetic/unnatural expression vs native Tau was likely. Another interesting observation included the fact that the morphology of Tau aggregates seemed to look ring-shaped in transgenic mice compared to those of the brain of AD patients, which were flame-shaped. 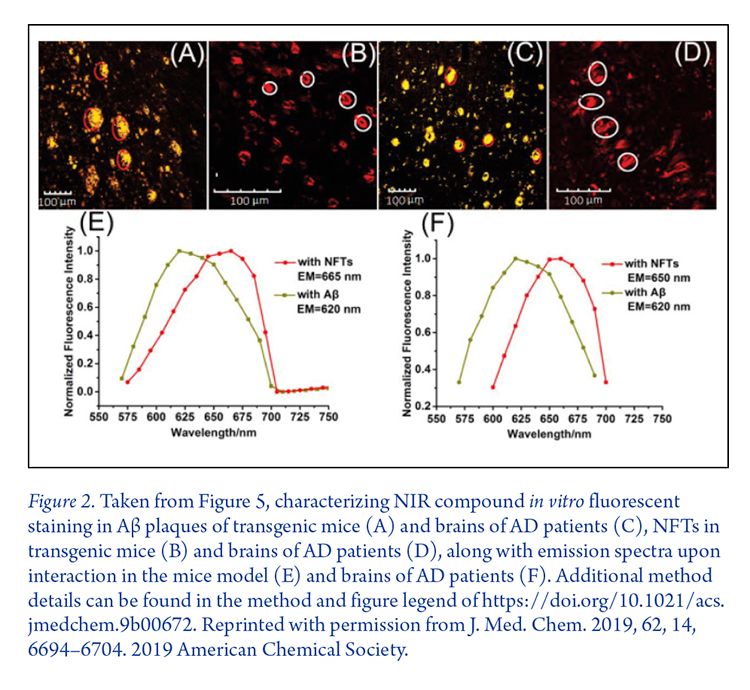 For any neuroimaging application, the blood-brain barrier (BBB) permeability and bioavailability are also key. Brain intake of the NIR compound, which includes a quinoxaline ring, provided lipophilicity allowing good BBB penetration; its bioavailability as measured both in vivo as well as with ex vivo staining showed good brain kinetics that provided intense signals, which quickly decayed over 60 mins. Similarly, relative fluorescence was higher in transgenic Aβ mice compared to wildtype, and frozen brain sections ex vivo indicated high signal-to- noise ratio in transgenic mice whilst showing no specific signals in wildtype mice (Figure 3). When considering the potential impact of dual NIR probes on neuroimaging , Dr. Cui noted that “…dual imaging of Aβ and Tau deposits would be very helpful and may provide more information and a new approach to better understand or diagnose AD.” 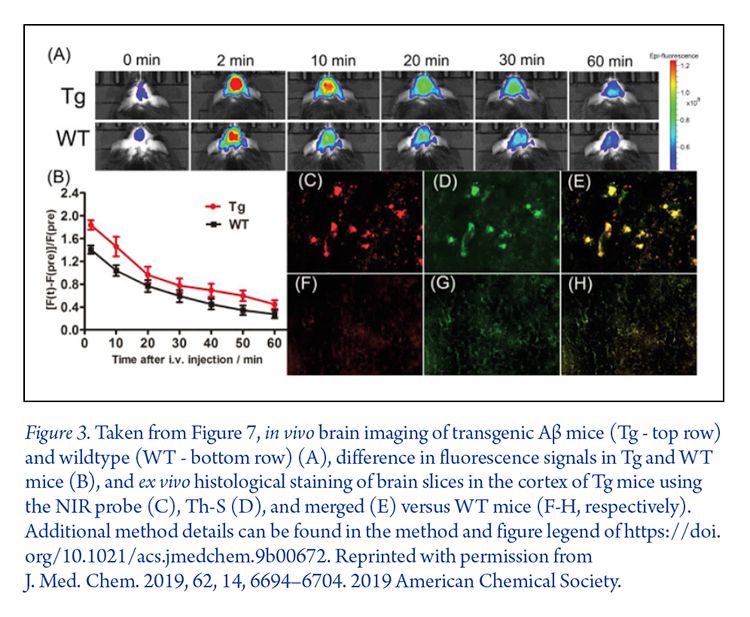 In summary, as Aβ and Tau aggregates in SPs and NFTs remain crucial biomarkers for AD as the basis of ATN, technologies that can not only detect but also differentiate between these protein aggregates will continue to be an important area of active research. Brain imaging will also remain an important platform, and advances in methods such as multispectral fluorescence imaging (MSFI) and unmixing methods will continue to rely on the development of novel tools such as these NIR fluorescence probes to accelerate diagnostics and potential therapeutics aimed at curbing the burdens of AD management.