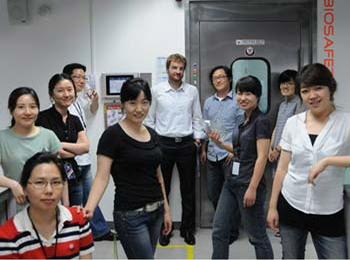 The Institut Pasteur Korea (IP-Korea) in Pangyo, Korea, is a translational research institute that uses a technology-based approach for small molecule therapeutic development.  Inaugurated in 2004, IP-Korea is a member of the prestigious Institut Pasteur International Network, and is supported by funding from the Gyeonggi Provence and the Korean Ministry of Education, Science and Technology.

Dr. Jonathan Cechetto is head of the STP group. He is responsible for planning drug discovery activities and research programs in small molecule high throughput and high content screening. He also coordinates the compound management, automation and assay development teams within the screening group, and is responsible for data management. Jonathan obtained his Ph.D. in Biochemistry from McMaster University (Hamilton, Canada) in 2006. He is experienced in the field of high throughput screening and was previously Manager of the McMaster HTS Lab in Hamilton. Jonathan joined the IP-Korea in 2007 and was appointed to his current position as team leader in 2009.

Within the IP-Korea, Jonathan’s team works closely with various groups on assay development, screening, and hit-to-lead optimization. These groups include biology groups, computer scientists who design custom algorithms for disease models, and a medicinal chemistry group.  The disease models studied are varied and include infectious diseases (including a large number of “neglected” diseases such as Malaria and Chagas disease) and chronic diseases such as multiple sclerosis and Alzheimer’s.

In order to study infectious disease models in their phenotypic compound screening, the group uses an automated platform with an Opera® high content screening system. This system is only one of a few in the world which is contained in a Biosafety Level 3 facility and allows screening for virulent Mycobacterium tuberculosis, HIV-1, and other contagious pathogens in human cells. The group also uses a PerkinElmer cell::explorer™ robotic automation platform, with integrated Opera, in a Biosafety Level 2 facility (for pathogens such as Leishmania, Trypanosoma cruzi, and Hepatitis C virus). In addition, they have a stand-alone Opera which is used for assay development.

By using advanced imaging to study relevant disease models, the group is able to identify small molecule inhibitors that can reverse disease phenotypes. Compared to classical drug discovery, these compounds are screened within the cellular context of a disease, as opposed to against purified target molecules, and can therefore be developed into therapies more quickly. IP-Korea’s unique capabilities and strong performance were recently recognized in the neglected disease arena by an award from the Drugs for Neglected Diseases initiative (DNDi) as a Partner of the Year for 2010.

Jonathan says, “As all of our screening is based on visualizing the effect of small molecules on different disease models, the Opera is vital for our basic research and drug discovery efforts. The image quality, robustness, flexibility and throughput of the Opera have been a crucial part of our success in all of our screening programs”.