Jeremy Simpson is a Professor of Cell Biology at University College Dublin (UCD), Ireland, and a Fellow of the Conway Institute of Biomolecular and Biomedical Research at UCD. His research interests are the organisation and regulation of eukaryotic membrane traffic pathways. Jeremy is also responsible for the UCD Cell Screening Laboratory and is the programme developer and co-ordinator for UCD’s new MSc programme in Imaging and Microscopy.

Jeremy obtained his BSc degree in Microbiology and Microbial Technology from the University of Warwick, UK, in 1992. He carried out his Ph.D research in the same university, in the laboratory of Professor Mike Lord and Professor Lynne Roberts, studying toxin trafficking in mammalian cells. Jeremy then went on to perform post-doctoral research at the Imperial Cancer Research Fund in London and the Scripps Research Institute, San Diego. In 1999 he was awarded an EMBO Long Term Fellowship which enabled him to move to the newly established laboratory of Dr. Rainer Pepperkok at the European Molecular Biology Laboratory (EMBL) in Heidelberg, Germany. Jeremy later became a staff member at EMBL and focused on developing high-throughput methods (primarily using microscopy) to study membrane traffic. He moved to his current position at UCD in 2008.

The internal organelles of mammalian cells allow the possibility of keeping proteins with different functions in separate locations. The maintenance of this spatial organisation within cells is achieved through membrane traffic, a process that uses vesicular and tubular membrane carriers to transport material between compartments in both the secretory and endocytic systems. Jeremy’s lab is interested in understanding how these pathways are organised globally, and how knowledge of these pathways at the subcellular and molecular levels can be used to improve drug delivery.

The lab primarily uses fluorescence light microscopy approaches to study membrane traffic. In particular they employ recombination cloning, GFP-tagging, and RNAi combined with confocal and high content screening microscopy to identify the molecular machinery involved and assess its relevance to particular trafficking steps. The Columbus™ Image Data Management and Analysis System is an essential part of the group’s workflow.

Jeremy says, “A key component of our strategy is accurate and reliable image analysis and quantification. This is particularly challenging when dealing with very large image data sets coming from high content RNAi screens. We have found that the Columbus system meets this challenge well (see the example in figure 1). The Columbus system can deal with both the number and wide variety of image types that come from our different microscope systems and it has the flexibility to allow us to quantify data from diverse assays. In addition, the scripting option lets us integrate our own image analysis algorithms within the environment of the Columbus system”.

Jeremy has also found the Columbus system to be an extremely useful teaching tool, and he uses it as part of UCD’s taught MSc programme in Imaging and Microscopy. Jeremy says, “The Columbus system allows us to easily demonstrate the basics of image analysis, including cell segmentation, thresholding and object recognition”.

Jeremy was an invited speaker at the recent Science/AAAS webinar "Discovering New Drugs for Disease: Advancing Imaging in the Well". You can still register to watch this webinar. 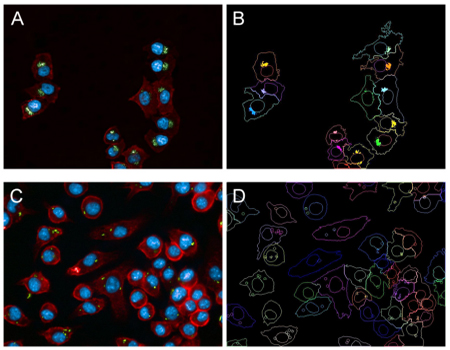 Figure 1: The figure shows two examples of cellular internalisation events of pathogens and their quantification by high content screening and analysis. In panels A and B, fluorescently-labelled toxins (red) have been added to fibroblasts and the Columbus Image Data Management and Analysis System was used to quantify the amount of internalised toxin and determine how much of the toxin reaches the Golgi complex (green). The raw image is shown on the left and the segmented image and thresholded areas used for analysis are shown on the right. In panels C and D, macrophages have been infected with bacterial cells (green). The Columbus system allowed researchers to count the number of bacteria per macrophage, and then quantify changes in macrophage morphology.