Dr. Chris Bakal is a Team Leader at the Chester Beatty Laboratories within the Institute of Cancer Research (ICR) in London, UK. The Bakal laboratory studies the signaling networks that control cell and organelle shape in the context of health and disease. To explore these networks, the group uses Opera® High Content Screening Systems and the Columbus™ Image Data Storage and Analysis System.

The ability of cells with identical genotypes to adopt different shapes is a fundamental determinant of organism development and homeostasis. For example, the migration of specific cells during embryogenesis relies entirely on shape changes that are coordinated in space and time. A central challenge in biology is to comprehensively describe the systems that control cell form in response to environmental and cellular conditions. Understanding the architecture and dynamics of morphogenetic systems also has widespread clinical relevance as these systems fail, and/or are re-engineered by mutation, in a number of diseases such as metastatic cancers.

A related problem is to understand how the shape of organelles, such as the mitochondria and Endoplasmic Reticulum (ER), are regulated in response to changes in energy and nutrient levels. The form of different organelles follows their function, and different shapes are essential for organelles to perform critical tasks such as ATP production, lipid metabolism, protein folding, and secretion.

Explaining the motivation behind his laboratory’s work, Chris says, “Very little is still understood as to how signaling controls cell and organelle shape, yet the failure to maintain or change cell/organelle shape underpins a vast array of diseases such as cancer, diabetes, and neurodegenerative disorders. It is therefore imperative that we acquire a better understanding of these systems”. One area that the team is particularly interested in is the biological switches that cause cells to change shape, become cancerous and spread around the body. By understanding how these switches work, scientists may one day find a way to control them through drugs or other therapies.

To describe signaling networks and biological switches, the Bakal laboratory performs genome-wide RNAi screens to quantify the contribution of all genes to cell and organelle shape. In these screens, cells and/or organelles are labeled with fluorescent markers following systematic RNAi-knockdown of individual genes. Automated imaging and analysis of samples is then performed using the Opera and Columbus Systems.

Describing the reasons why they use the Opera system, Chris explains, “Quantifying the shape of cells, and in particular organelles such as mitochondria, is a very difficult problem in computer vision as it requires both excellent image resolution, and the ability to extract hundreds of different parameters that can accurately describe complex forms. For our team at ICR, this challenge is made even more difficult by the fact that we want to screen thousands of genes in short periods of time. We need a system that can generate accurate morphological signatures in very high-throughput. I began working with the Opera as a postdoctoral fellow at Harvard, and wanted to bring the same technology to the ICR at London because I believe it is really the only microscope on the market that is capable of generating high quality images in high throughput”. 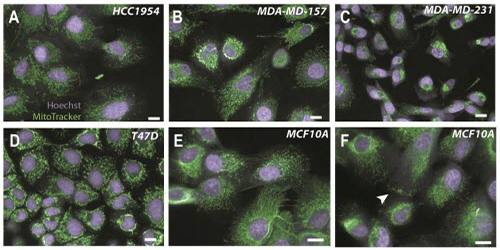 Figure 1: Diverse mitochondrial morphologies in human breast epithelial tumour and non-tumour cells. Tumour cells (A-D) and non-tumour cells (E-F) were imaged at 40X and 60X respectively using the Opera High Content Screening System (Scale bar for all images = 10 micrometers). Mitochondria are labelled with MitoTracker® (green) and nuclei are stained with Hoechst (purple). In panel E, cells with both reticular and punctate mitochondria can be observed, and in panel F, the accumulation of mitochondria at the outer edge of a cell is seen (arrowhead).

Figure 1 illustrates the diverse mitochondrial morphologies that can be observed in human breast epithelial tumour and non-tumour cells. Mitochondria are complex networks that vary both between cell lines and within cell populations. Reliably quantifying the structures of organelles such as these therefore represents a considerable analytical challenge.

Members of the Bakal laboratory use the Columbus system to analyze the structures of cells and/or organelles. Hundreds of morphological parameters such as cell area, roundness, length, width and width/length ratio are typically measured. They also use STAR morphology features to calculate the properties of symmetry, threshold compactness, axial properties, roundness, and profile, and SER texture features to measure local patterns of pixel intensity (Figure 2). 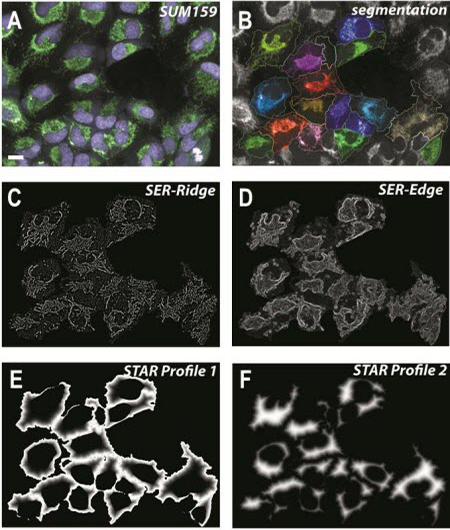 Members of the Bakal laboratory find Columbus to be a robust data management system, and rely on its image analysis capability. Chris comments, “One of the great things about Columbus is that it gives lab members who may not have had any previous experience in computer vision or high-content methods a straightforward and easy-to-learn way of performing sophisticated image analysis. Also, users with more experience often use Columbus to extract many image descriptors, such as STAR features, which are not part of conventional image analysis packages that they are familiar with”.

Following these types of analyses, the team assigns individual genes a “Quantitative Morphological Signature” that describes the shape of a cell/organelle. Compendia of signatures are then analyzed using computational methods to infer the structure of signaling networks. The resulting network models serve as the basis for in-depth validation experiments. Chris and his team would also like to see these Quantitative Signatures used in others ways, such as biomarkers which could serve as a cost-effective way to predict disease status or drug resistance.

With the Opera and Columbus systems in place, Chris believes the next challenge is how to integrate image-based approaches with other data sources to get even deeper insights into the relationship between genotypes and phenotypes such as shape.

The group’s research is supported by the Wellcome Trust, the Biotechnology and Biological Sciences Research Council (BBSRC), and Cancer Research UK.

Find out more about Chris's research

Chris obtained his Ph.D. from the University of Toronto, and was a postdoctoral fellow in the laboratory of Norbert Perrimon at Harvard Medical School.