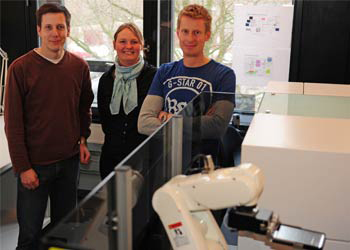 Symphogen is a Danish-based biotech company focused on developing new antibody therapeutics against infectious disease and cancer by combining two or more recombinant antibodies in their drugs leads. The Opera User Group at Symphogen is responsible for conducting primary screening and characterization of antibody leads as well as studying their mechanism of action on infectious disease and cancer targets. Members of the Opera user group include Principal Scientist Mikkel W. Pedersen (Ph.D.), Senior Scientist Klaus Koefoed (Ph.D.) and Senior Scientist Magnus Strandh (Ph.D.).

Within the Opera User Group, very large human or murine antibody repertoires containing thousands of monoclonal antibodies (mAbs) are cloned by a PCR based Symplex™ technology applied on single-sorted human plasma cells, stimulated memory B cells or mouse spleenocytes. Antibody libraries are screened for desired specificity in primary functional assays, e.g. virus neutralization assays for viral disease targets, receptor internalization, or whole cell fluorescence assays for cancer targets. The identified leads are further characterized and grouped by functionality, for example the cellular staining pattern and efficiency of induction of receptor internalization, or virus neutralization on an expanded panel of cell lines. Finally, promising leads are combined to investigate potential antibody synergy, which will further increase the potency and efficacy of the functional readout.

Klaus says, "For screening and characterization we use the Opera LX confocal system with 10-60x magnifying lenses, 3 lasers, a UV light source and an automated plate loading system. We chose the Opera system because it is the most advanced full confocal high throughput system for high content screening. The option for full confocality was important for us, since some screening campaigns, e.g. on cells in suspension, are most easily performed in a homogenous format. We also wanted a high throughput microscope that could be used for both primary screenings and high resolution mechanism-of-action studies. We find that functional screening, performed on the Opera confocal system, identifies the rare, unexpected and most potent antibody combinations and that focusing antibody screening campaigns on only binding to recombinant antigens are in many cases, misleading". 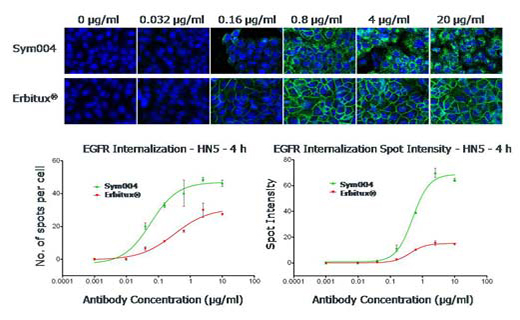 Top - Confocal images showing the location of labeled Sym004 or Erbitux® in HN5 cancer cells. Sym004 is a recombinant IgG1 antibody product consisting of two mAbs directed against the epidermal growth factor receptor (EGFR). Erbitux® is an anti-EGFR mAb which is currently approved for cancer treatment. HN5 cancer cells were treated with different concentrations of Sym004 or Erbitux® and were incubated for 4 h. The images were acquired using the Opera LX confocal high content screening system. Bottom – Internalization of antibody-containing vesicles was quantified using Acapella software. The number of spots per cell (left) and spot intensity (right) is shown.