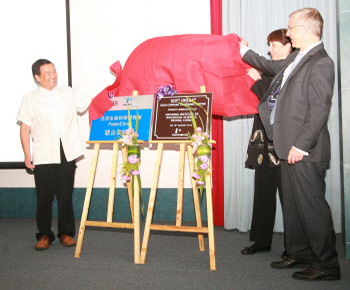 Unveiling of a commemorative plaque for the 100th Opera installation at NIBS, Beijing

The National Institute of Biological Sciences (NIBS), Beijing, recently became the owners of the 100th Opera® High Content Screening System to be installed across the globe.

Founded in 2003 as part of a strategic government initiative to advance the frontiers of basic life science research in China, NIBS is now a top-ranking internationally competitive research institute which attracts international attention.

Professor Xiaodong Wang has been the Director of NIBS since it was first established and, with the support of the entire faculty, has nurtured a culture of innovation where freedom of research is honoured and technological innovation is encouraged. Scientists are also increasingly focused on how basic science can be translated into pre-clinical applications.

Imaging is an integral part of research and discovery with NIBS. In addition to the recently acquired Opera system, the institute also owns an UltraVIEW® VoX 3D Live Cell Imaging System. Two NIBS research investigators who currently use the UltraVIEW VoX system, and who are looking forward to starting experiments with the new Opera system, are Dr. Feng Shao and Dr. Xiaochen Wang.

Dr. Shao says, “With the UltraVIEW VoX system and the new Opera system, we can now directly visualize and discover many new cellular and molecular processes involved in the interplay between bacterial pathogens and host mammalian cells. The new technology platform provided by these instruments will also allow us to further identify new genes and define new mechanisms that are critical for bacterial virulence and/or host defence responses”.

When asked why the institute chose PerkinElmer’s solutions, Dr. Shao replied, “We care most about quality of images, and software that can get the most information as possible. These instruments provide high image resolution with high speed and have image analysis softwares that everyone can access”.

Dr. Wang (pictured) is also an elected HHMI international early career scientist. Her laboratory is interested in the regulation of phagocytosis during programmed cell death. Phagocytosis of apoptotic cells is an integral part of the cell death program and an important event in tissue remodeling, suppression of inflammation as well as regulation of immune response. Defects in dying cell clearance contribute to inflammatory diseases and autoimmune disorders. Researchers use Caenorhabditis elegans as a model system to investigate how apoptotic cells are cleared during apoptosis and how specific membrane traffic events are regulated during phagocytosis and endocytosis.

Dr. Wang comments, “With the UltraVIEW VoX system we can catch the highly transient cell biological events that occur during phagocytosis and phagosome maturation. The high temporal and spatial resolution provided by the UltraVIEW VoX system allows us to establish new ‘land marks’ for revealing novel gene functions and mechanisms by which apoptotic cell clearance is controlled”.

To celebrate the installation of the 100th Opera system at NIBS, and the continued collaboration with PerkinElmer, over 100 staff and students from NIBS joined with PerkinElmer team members for the unveiling of a commemorative plaque. The event also included presentations from NIBS Director Professor Wang (pictured, right) and Dr. Shao, and scientific presentations from guest speakers Professor Spencer Shorte, Institute Pasteur Paris and Dr. Jonathan Cechetto, Institute Pasteur Korea, both of whom are prestigious owners of Opera systems.