Scintillation proximity assay (SPA) is a homogeneous and versatile technology for the rapid and sensitive assay of a wide range of biological processes, including applications using enzyme and receptor targets, radioimmunoassays, and molecular interactions. When 3H, 14C, and 125I radioisotopes decay, they release β-particles (or Auger electrons, in the case of 125I). The distance these particles travel through an aqueous solution is dependent on the energy of the particle. If a radioactive molecule is held in close enough proximity to a SPA Scintillation Bead or a SPA Imaging Bead, the decay particles stimulate the scintillant within the bead to emit light, which is then detected in a PMT-based scintillation counter or on a CCD-based imager, respectively. However, if the radioactive molecule does not associate with the SPA bead, the decay particles will not have sufficient energy to reach the bead and no light will be emitted. This discrimination of binding by proximity means that no physical separation of bound and free radiochemical is required. 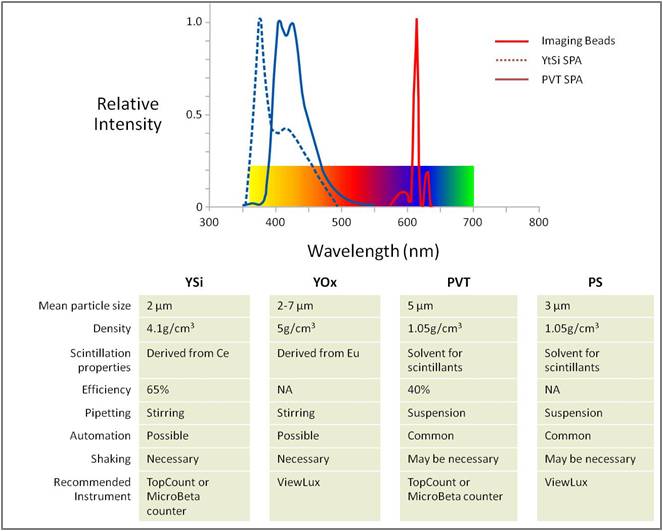 The scintillator in the PVT beads is diphenylanthracine (DPA), which is co-polymerized in the polyvinyl toluene matrix. In YSi SPA beads, naturally occurring cerium ions act as scintillators and are stably trapped within the yttrium silicate crystal lattice. Both scintillators emit a blue light (400 – 450 nm) upon activation. This blue light emission is best captured on a PMT-based scintillation counter (Tri-Carb® for single tube detection; MicroBeta2® or TopCount® for microplate detection).

Europium is the scintillator co-polymerized in the polystyrene matrix in the PS imaging beads and stably trapped within the yttrium oxide crystal lattice of the YOx imaging beads. This scintillator emits a red light (615 nm) upon activation. This red light emission is best captured on a CCD-camera based detector (ViewLux™) which provides μHTS capability by imaging an entire 384- or 1536-well microplate at one time.

Each bead type can be suitably derivatized for use in several types of SPA applications.

The choice of SPA bead depends on several parameters and these are summarized in Table 2.

Q. What liquid scintillation counter window settings do I need to use for counting an SPA assay?
A. For counting SPA assays in a liquid scintillation counter or instruments other than the TopCount counter or MicroBeta counter, set the windows to wide open or count in a ³²P channel. Make certain that you use a blank such as beads plus radioactive tracer, as well as any other assay-specific controls to assess origins of any detectable background.

Q. What is the average size of the YSi and PVT SPA beads?
A. The yttrium silicate (YSi) and polyvinyl toluene (PVT) SPA beads range in size from 2-8 µm. The PVT SPA beads average approximately 5 µm in diameter, while the YSi beads are irregular-shaped crystals averaging 2.5 µm in diameter.

Q. How does SPA work with gamma emitters?
A. [125I] and other gamma emitters decay by a process termed "electron capture". This type of decay gives rise to particles named Auger (pronounced 'oh-zhay') electrons and these electrons are detectable by SPA beads. The most common gamma-emitters that have been used in SPA include Iodine-125, Calicium-45, Rubidium-86, Selenium-75, and Cobalt-65.

Q. What is the maximum centrifuge speed I can use to spin down the SPA beads?
A. As a rule of thumb treat the SPA beads as you would cells, spinning at no more than 2,000 rpm in a standard centrifuge without braking. Though higher speed or centrifugal g-forces will not affect the integrity of the SPA bead itself, is not recommended since the molecular interactions of interest may not be stable to such conditions.

Q: How are proteins and other molecules linked or coated onto SPA beads?
A. Proteins or other macromolecules are covalently linked to SPA beads (PVT, PS, YSi, or YOx) in one of two ways:

Q. What kind of plates do I use with my SPA assays?
A. Most any type of microplate can be used for SPA. However, plates that have high reflective optics and low associated phosphorescence are preferable-these plates are typically opaque white. If you are using a bottom reading instrument, the use of white-walled plates would be best. Additionally, there are plates available that may be used to reduce the non-specific binding of radiolabeled ligand to plate walls which could cause an increase in background signal. They may not be useful for all applications but should be considered as a tool that may reduce the non-specific binding of your labeled compound to the microplate well.

Q. What fluor or scintillator is present in the PVT and YSi SPA beads?
A. The scintillator in the PVT beads is diphenylanthracine (DPA), which is co-polymerized in the polyvinyl toluene matrix. In YSi SPA beads, naturally occuring cerium ions act as scintillators and are stably trapped within the yttrium silicate crystal lattice.

Q. What is meant by the term 'non-proximity effect' and how can it be minimized?
A. A non-proximity effect, or "NPE", is low-level background signal caused by stimulation of SPA beads by unbound radioactivity in solution. NPE generally can occur with higher energy isotopes such as 33P, 35S, and 14C. The potential for NPE can be minimized by maximizing the ratio of solution to beads- mainly by centrifuging or allowing the beads to settle prior to counting, and by increasing the volume of the assay.

Q. What is the mechanism of cell membrane binding to Wheat Germ Agglutinin and poly-lysine SPA beads?
A. Cell membranes couple to the wheat germ agglutinin (WGA) coated SPA beads through interactions between WGA and N-acetylglucosamine residues that are present in glycosylated cell surface proteins. In the case of poly-lysine coated SPA beads, salt-bridges form between the positively charged poly-lysine sites on the bead and the negatively charged lipids that comprise the cellular membrane.

Q. Why are some SPA beads coated with PEI along with WGA?
A. SPA (Scintillation Proximity Assay) beads may be coated with WGA (wheat germ agglutin) alone, or in concert with the agent PEI (polyethyleneimine). The PEI helps minimize non-specific background.