Quenching occurs when the energy emitted by the radioisotope is not caught entirely by the photomultiplier tube of the counting instrument. The signal reduction can occur at various stages of the energy transmission process: 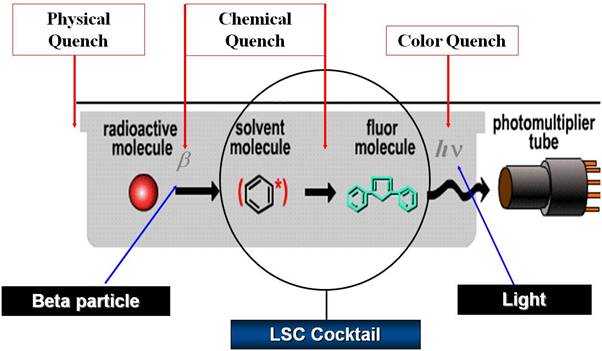 In order to determine the absolute activity of a sample, expressed in DPM (disintegrations per minute), it is necessary to measure the level of quench of the samples first. Various methods can be used in order to determine the counting efficiency of the measure. The counting efficiency expresses the level of quench in a sample and is the ratio between the number of events counted by the instrument (expressed in CPM: counts per minute or CPS: counts per second) and the real quantity of disintegration events.

An increase in quench will reduce the counting efficiency: fewer photons will hit the detector, and the quantity of counts will be lower for a quantity of radioactive events. 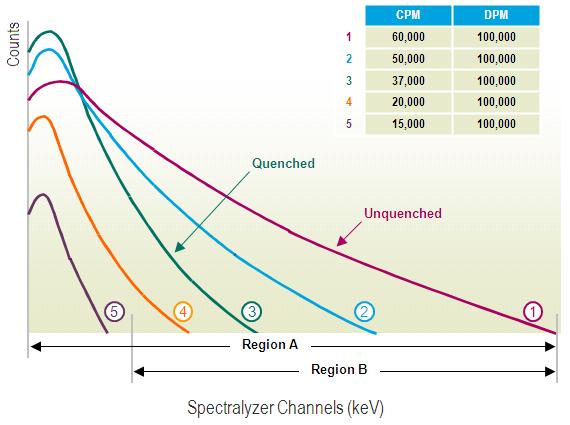 Manual method using the addition of an quantity of known DPMs (disintergrations per minute) from an internal standard to an unknown sample to determine the counting efficiency.

From there, we obtain the counting efficiency and the DPM(s) :

This method is extremely accurate but labor intensive.

Use of Quench Curves

A standard quench curve is a series of standards in which the absolute radioactivity (DPM) per vial is constant and the amount of quench increases from vial to vial. When a quench curve is made, the DPM value in each standard is known. Each standard is counted and the CPM is measured. The counting efficiency is calculated using the following relationship:

At the same time, the quench indicating parameter (QIP) is measured for each standard. A correlation is made using the QIP on one axis (X) and the % efficiency on the other axis (Y). A curve is fitted to the standard points. Examples of quench curves are shown below, for tritium and 14C: 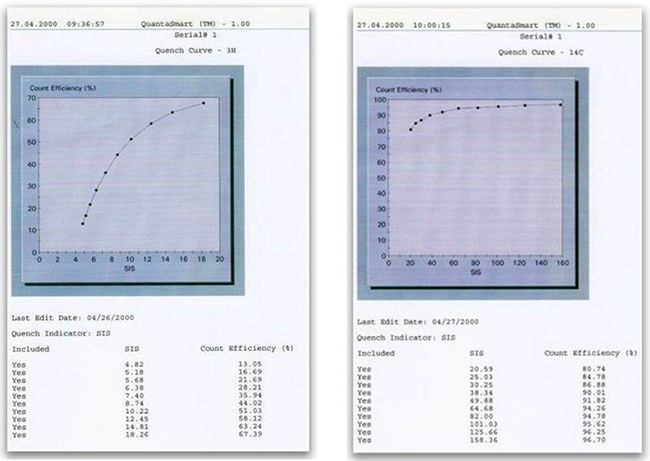 When unknowns are counted, CPM and the QIP of the sample are measured. Using the QIP, the counting efficiency is determined from the quench curve, and the sample DPM are calculated by applying the appropriate efficiency to the CPM of the sample.

Quench curves use the relationship between counting efficiency and the QIP to translate the measured CPM to DPM. The two most important methodologies to determine the QIP use either the sample spectrum or the spectrum of the external standard.

The QIP can be derived from the sample spectrum or from the external standard spectrum:

SIS (Spectral Index of the Sample)

This method is not adapted for dual counting and requires good counting statistics. It is therefore not recommended for low activity samples.

The tSIE (also called SQP(E) on Wallac counters) is derived from the external standard spectrum. Vial counters include a built-in gamma-source of 133Ba or 152Eu, external to the sample. The gamma radiation of the external source provokes the ejection of an orbital electron from atoms in its environment. The ejected electron, called a Compton electron, is very similar to beta particles, and will induce the same scintillation effects. 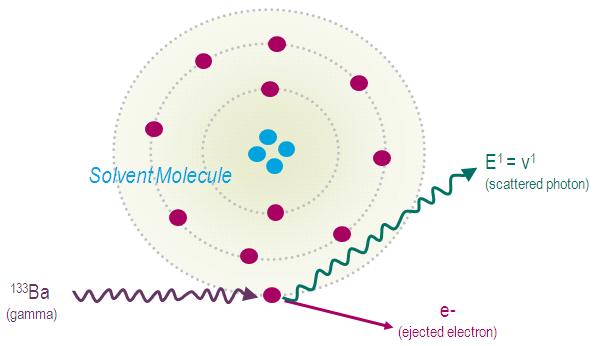 From there, the software of the instrument uses the RST (Reverse Spectral Transform) technique to obtain the transformed spectrum of the external source: 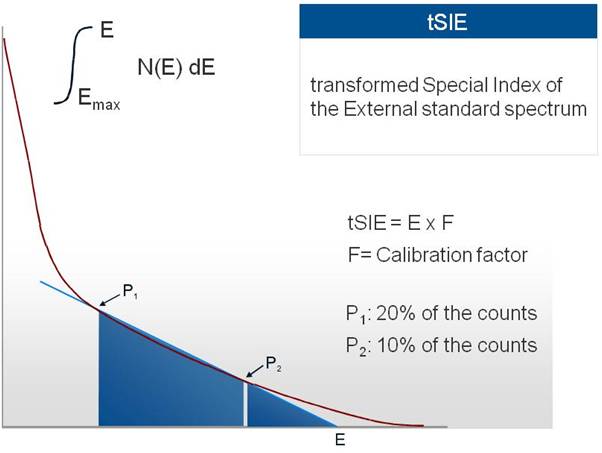 Two points are theoretically chosen by the software, the first at 20% of the counts and the second at 10% of the counts. Between these points a line is drawn, whose intersection with the X-axis defines the tSIE value. This process is also done when the SNC run is performed on the instrument (ideally on a regular basis), and it resets the tSIE value of an unquenched sample to 1000.

With increasing quench, the Compton-electron spectrum will be modified; as a consequence the tSIE value decreases.

Quench curves for 3H and 14C are usually pre-installed in the library of the instrument. However, users can decide to build new quench curves, either preparing their own quenched sets, or using commercial sets. These sets should be chosen based on the choice of the cocktail used for counting:

Quench sets usually contain 10 vials of known activity with increasing quantity of a quenching agent. When counted, a curve is produced showing the relation between tSIE and counting efficiency (see picture below): 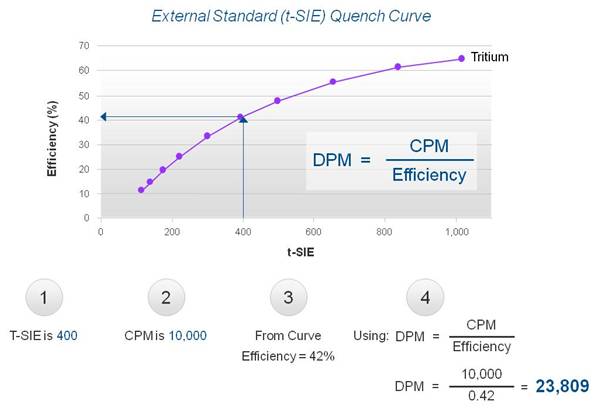 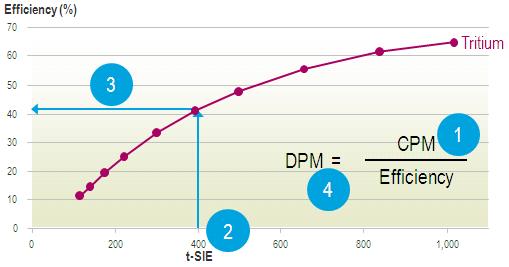 Any number of samples can be counted with Direct DPM in one or more cassettes. Direct DPM is best used for sample activity in excess of 1000 CPM. The direct DPM method is extremely simple to use, does not require windows settings, corrects for chemical and color quench, and is very useful for short half-life nuclides when quench standards are not commercially available.

Note that Direct DPM cannot be used for dual-labeled samples, or for overlaid spectra (decay with secondary events, as with 125I, occurring with non-pure beta-/gamma-nuclides). Direct DPM is based on the sample counts and needs good counting statistics for accurate results, samples should produce more than 1000 CPM. Therefore, this method cannot be used for low level applications.