All liquid scintillation cocktails contain at least an organic solvent and one or more scintillators. The major part of the LSC cocktails, the so-called emulsifying cocktails, contain a combinantion of surfactants (detergents) to be able to hold aqueous samples. Refer to the cocktail selection tables for assistance in choosing a cocktail for your application.

When a radioactive decay event occurs in an LSC cocktail, the probability of absorption of the released energy by the solvent molecules of the cocktail is high.

Good solvents for Liquid Scintillation Counting are alkylated aromatic organic solvents. Nowadays the solvents are divided into “classical” and “safer” solvents, based on the physical properties. The flashpoint is the main criterion for this division. See page 4 of our brochure for a table listing cocktails by solvent type.

Aromatic organic solvents have proven to be the best solvents for liquid scintillation counting due to the high electron density, which provides a target for β-interaction, capturing the energy of the nuclear decay.

The structures of the four main traditional solvents (Toluene, Xylene (mixture of isomers) and Pseudocumene) are shown below. Other benzene derivatives can be used as well.

Classical solvents
These solvents are hazardous by inhalation (and skin absorption), and can be irritating to skin and eyes. They have a high vapor pressure, a low flash point [from 5 - 50°C (flammable)], and storage in laboratories is restricted and should be used in fume hoods. Nowadays in practice Pseudocumene is used exclusively in classical cocktails.

Why safer, not just “safe”? Although these solvents are much safer in practical use, we must bear in mind that we are dealing with chemicals. All the safety aspects are favorable compared to the classical solvents.

The molecular structures of the three main "safer" solvents used in the composition of scintillation cocktails (DIPN, PXE, LAB) are shown below. These have low toxicity and are classified as harmless for transport & storage. They have a low vapor pressure and a high flash point [above 140°C (non-flammable)].

Ultima Gold has been tested for biodegradability according to Test Method OECD 301E (equivalent to ISO Method 7827 1984). Test requirements were met, showing >70% DOC (dissolved organic carbon) removal within 28 days. A cocktail which passes this test can be described as “Readily Biodegradable”.

The molecules of the fluors/scintillator dissolved in the solvent absorb the energy released by the solvent and re-emit this energy (at a higher wavelength) as visible light of a wavelength around 420 nm. The scintillators preferably have a fast decay time and a high Fluorescence Quantum Yield. 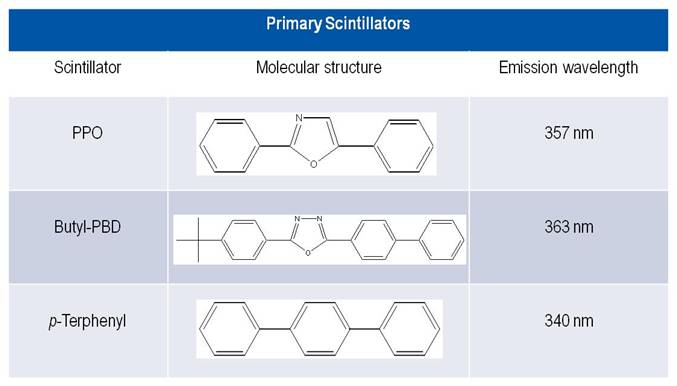 *While modern phototubes are generally capable of counting the light pulses from the primary scintillator, secondary scintillators have been found to improve efficiency in many cases and are still included in the major part of LSC cocktails.

The most common secondary scintillator is Bis-MSB [p-bis-(o-MethylStyryl)-Benzene]. POPOP [1-4,bis-2-(5-Phenyloxazolyl)-benzene] is still apllied in LSC cocktails and plastic scintillators. 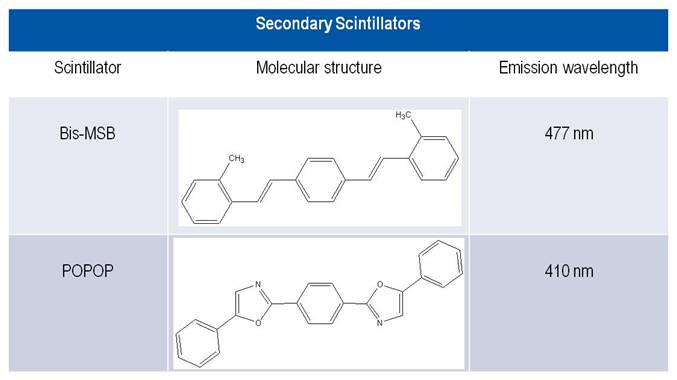 The majority of radioactive species are present in an aqueous format, and as such are not miscible with aromatic organic solvents. The presence of emulsifiers (also called detergents or surfactants) in a cocktail enables an aqueous sample to come into intimate contact with the aromatic solvent by forming a stable, clear microemulsion, necessary for stable conditions over the counting period. 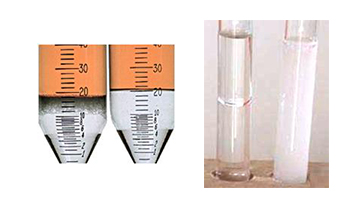 Upon addition of water to a LSC cocktail, large aggregates are formed in which the water molecule is in the middle. The aggregate is surrounded by the hydrophilic parts of the surfactant. The non-polar head of the surfactant is directed outside into the direction of the solvent/scintillator molecules; a stable microemulsion is obtained, also called micelle formation.

Primarily, two types of surfactants are applied in LSC cocktails: 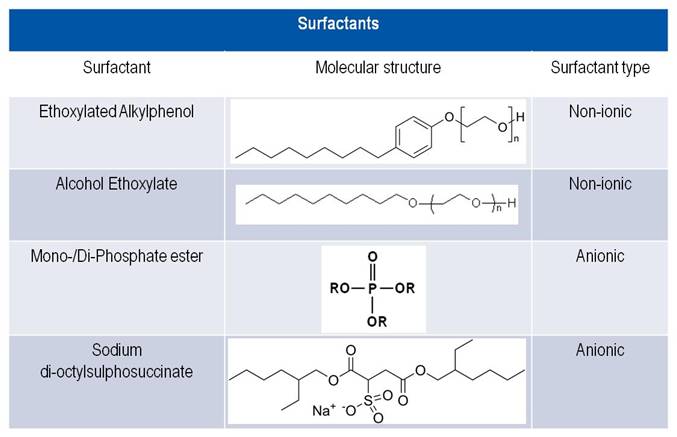