The method requires a liquid scintillation counter employing a Pulse Decay Analysis (PDA) technique to discriminate alpha events from beta events in samples (simultaneous quantitation of alpha and beta particles in the same sample), based on the duration of the light pulses they produce in a liquid scintillator. PDA uses a special pulse decay discriminator (PDD) to categorize the pulses as either alpha events or beta events, and stores the events appropriately in separate multichannel analyzers (MCAs).

Many samples for environmental monitoring, nuclear power station monitoring, drinking water analysis, and nuclear waste clean-up require analysis of total beta and total alpha radionuclides. However, in liquid scintillation counters, the pulse height spectra of alpha-emitting radionuclides overlap the spectra of higher energy beta emitters, such as 137Cs, 89Sr, and 90Sr/90Y. Therefore, it is necessary to employ a form of pulse shape discrimination to differentiate alpha from beta emissions and compensate for this interference. PerkinElmer’s Time-Resolved Pulse Decay Analysis (TR-PDA), differentiates alpha from beta pulses according to their pulse decay characteristics. The pulse duration for alpha particles is typically longer than for betas. TR-PDA can run simultaneously with low level count modes, thereby achieving extremely low misclassification of beta and alpha particles, without compromising sensitivity. TR-PDA provides automatic or manual adjustment of the pulse decay discriminator (PDD). The automatic alpha/beta standard mode scans the range of possible PDDs without operator intervention, for both alpha and beta pulses, and determines the optimum PDD for minimum spillover. In the manual alpha/beta mode, the range and number of PDD values are set by the operator. 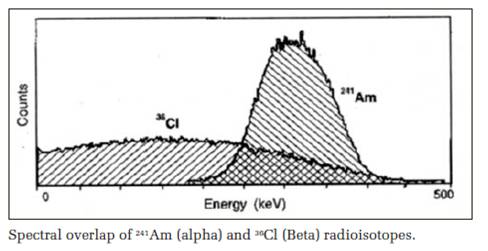 The advantages of using LSC with PDA for alpha/beta discrimination make this technique ideal for high-throughput screening of water, air filters, and swipes. The technique may also be applied to soil assays, urine bioassays and monitoring of nuclear power stations.

Note that quenching agents such as inorganic acids, organic acids, and extractive scintillators are often required to prepare samples when assaying high-level radioactive waste. Spectral data show that in spite of a shift to lower energy and a general broadening of the spectra, 100% counting efficiency is maintained for alpha nuclides. Extractive scintillators show improvement in alpha resolution compared to cocktails containing emulsifiers. However, resolution generally degrades with an increase in quench. This effect of quench on counting efficiency and resolution for alpha emitters is discussed in the "Effect of Quench on Quantitating Alpha Radionuclides by Liquid Scintillation Counting" application note.

Liquid scintillation counting with PDA provides a rapid, simple alternative to laborious alpha spectrometry when isotope-specific analysis is not required. The Pulse Decay Discriminator (PDD) is optimized to accurately separate the pulse types and store the events in separate MCAs. Alpha/beta discrimination electronics are necessary because alpha particle energies appear to be approximately 1/10th their kinetic energy when counted in a liquid scintillation cocktail. Therefore, a 5.00 MeV alpha will be detected as a symmetrical peak at approximately 500 keV. In the case where both alpha and high energy beta particles are present in the same sample, they cannot be differentiated on the basis of their energies. This is illustrated with the overlapping spectra of 36Cl and 241Am (see figure below). Even though alphas appear to have 1/10th their emitted energy, counting efficiency is maintained at nearly 100% because every decay event is detected even when quenched.

PDA provides the means to separate alpha events from beta events, despite their similar energies, in a liquid scintillation
counter. This is based on the fact that alpha particles produce light pulses in the cocktail that have a longer duration time than beta pulses. A greater portion of the light produced from alpha pulses comes from excitation which results in the tailing of the initial prompt portion of the alpha pulse. Thus, it takes longer for the light to dissipate for alpha-produced pulses than for beta produced pulses. The difference in the duration of alpha and beta pulses is illustrated in the figure on the right above.

This pulse decay time phenomenon can be used to establish an optimum alpha/beta discriminator setting. Only a pure beta
and a pure alpha standard are required to establish this optimum setting. A plot of percent spillover of alpha events into the beta MCA and beta events into the alpha MCA is automatically generated by the instrument. The optimum discriminator setting is automatically calculated from the intersection of the two curves. Once the optimum setting is determined, it is stored in a library for use in any counting protocol. Under optimum conditions, misclassifications as low as 0.5% can be obtained for routine samples. Counting efficiency for alpha emitters is nearly 100% and background for the entire alpha MCA is 0.5-1.0 CPM and 0.1-0.3 CPM for an optimized alpha counting region.