The LANCE® Ultra cAMP assay is a homogeneous time-resolved fluorescence energy transfer (TR-FRET) immunoassay designed to measure cAMP produced upon modulation of adenylyl cyclase activity by GPCRs. It is a functional assay for Gs-coupled and Gi-coupled GPCR studies. The assay is based on the competition between a Europium-labeled cAMP tracer and sample cAMP for binding sites on cAMP-specific antibodies labeled with ULight dye.

When the ULight anti-cAMP antibody is bound to the Eu-cAMP tracer, excitation at 340 nm excites the Europium. The energy is transferred to the ULight-labeled antibody. The fluorescence measured at 665 nm will decrease in the presence of cAMP from test samples, and resulting signals will be inversely proportional to the cAMP concentration of a sample (this is a competition assay) (Figure 1). The assay is intended for the detection of cAMP produced by cells or cell membrane preparations stimulated with GPCR agonists.

Figure 1. LANCE Ultra cAMP competition assay principle. Left panel: In the absence of cellular cAMP, the Eu-cAMP probe binds to the ULight-anti-cAMP antibody to generate maximum signal. Right panel: With increasing concentrations of free cAMP (cellular cAMP), the free cAMP can bind the antibody instead, resulting in a decrease in signal.
top

For Gs-coupled receptors, agonist stimulation of cells or membrane preparations results in an increase in cAMP levels, and a decrease in assay signal (this is a competition assay). Addition of an antagonist will reverse the response, resulting in an increase in signal.

For Gi-coupled receptors, cells are simultaneously stimulated by the adenylyl cyclase activator, forskolin, and by the agonist. An agonist will inhibit the forskolin-induced cAMP production, resulting in an increase in signal compared to forskolin alone (competition assay). Antagonists will block the effect of the agonist, resulting in a decrease in signal toward forskolin-induced levels. 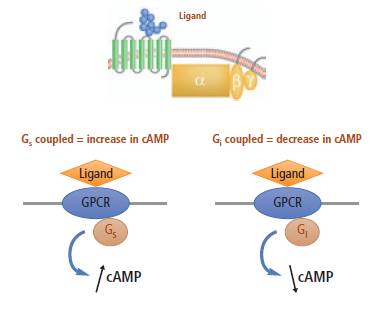 Required reagents available from other suppliers:

(See suggested sources for these reagents.)

The general protocol for the LANCE Ultra cAMP assay is summarized in Figure 2. Please refer to the manual for a more detailed protocol. 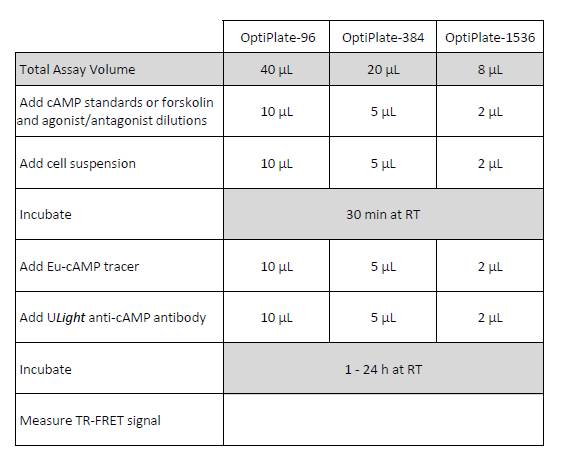 If you are switching from a different kit, we recommend that you re-optimize the number of cells used in the assay, as well as other parameters such as forskolin concentration (if applicable). The LANCE Ultra cAMP kit is more sensitive than other TR-FRET cAMP assays, and fewer cells will be needed.

These parameters should be optimized for each GPCR cell line:

Q. Do I have to lyse my cells?
A. The Detection buffer included in the kit contains a detergent (Triton X-100) that will lyse most cells.

Q. Do I need to use IBMX?
A. If you are using cells, yes. IBMX is a phosphodiesterase inhibitor and prevents the degradation of cAMP.

Q. Why am I using forskolin?
A. If you are studying a Gi-coupled receptor, you will be looking for a decrease in cAMP levels upon stimulation of your receptor. To raise the baseline levels of cAMP for unstimulated cells, you will treat all samples with forskolin. Forskolin stimulates adenylyl cyclase, which will trigger cAMP production.

Q. How do I pick a forskolin concentration?
A. Refer to pages 9-11 of the LANCE Ultra cAMP Assay Development Guide.

Q. What is the minimum receptor expression level required?
A. There is no minimum receptor expression level required. Some endogenous receptors were shown to induce the release of high amounts of cAMP. Tight coupling between receptors, G-proteins (Gi or Gs) and adenylate cyclase are the most critical determinants for obtaining robust cAMP assays. The LANCE Ultra cAMP assay is extremely sensitive and will allow measuring receptor stimulation in cells producing low levels of cAMP.

Q. Should I use transient or stable transfected cell lines?
A. Both transient and stable cell lines have been shown to produce good responses upon adenylate cyclase activation.

Q. Can I use frozen (irradiated, non-propagatable) cell lines?
A. Frozen cell lines, including cAMPZen® from PerkinElmer, have been shown to produce excellent responses upon adenylate cyclase activation.

Q. Can I run the assay while my cells are adhered to the plate?
A. Yes, cells can be treated while adherent if you prefer. Here is a protocol used by our R&D scientists working with adherent cells:

Q. Can I run LANCE Ultra cAMP assays in culture media, rather than stimulation buffer?
A. Yes, though keep in mind the TR-FRET signal might be somewhat quenched by components in your culture media. See the figure below for an example. 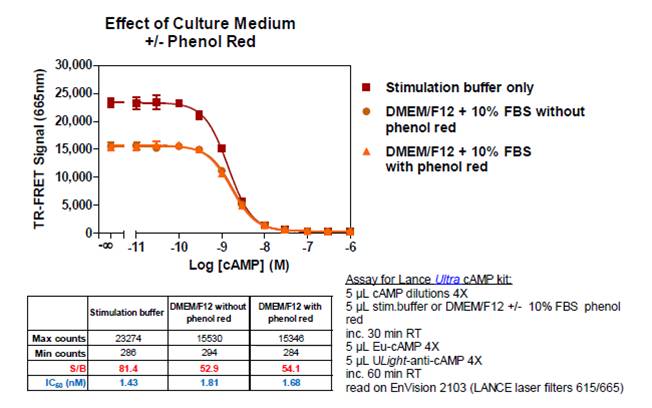 Q. How many cells should I use in my assay?
A. Cell number will influence the cAMP levels before (basal) and after adenylate cyclase activation. Performing a cell titration allows you to optimize the signal window by maximizing the difference between the basal and stimulated counts.

Q. Is it necessary to perform a time course for cell stimulation?
A. The stimulation time is critical for reaching optimal detection of cAMP. When determining the optimal cell density for the assay, we recommend stimulating the cells for 30 minutes as a first trial. Once the optimal cell density has been determined, perform a time course experiment with stimulation times ranging from 15 minutes to 120 minutes. The time of stimulation may vary depending on the cell line, receptor and agonist being studied.

Q. Can membrane preparations be used instead of whole cells?
A. Membranes expressing Gs-coupled receptors have been shown to produce good results when the stimulation buffer is supplemented with appropriate ions. 1-5 μg membranes are typically used in such assays. We recommend titrating membranes and all supplemented components (e.g. MgCl2, GTP, GDP and ATP) to optimize the performance of membrane-based assays.

Q. Can I decrease the number of additions (pipetting steps) in the assay?
A. Yes, if you wish to decrease the number of pipetting steps, you can mix the anti-cAMP antibody with your cells in stimulation buffer and add this mix to the plate in one pipetting step at the beginning of the assay. Do not use Detection buffer to dilute the anti-cAMP antibody if you choose to run the assay this way - the Detection buffer will lyse your cells. Make sure you adjust the concentration of your reagents so that you have the same final concentrations in the assay.

Q. Does IBMX interfere with the assay?
A. IBMX is a well known phosphodiesterase inhibitor. We recommend using IBMX at a concentration of 0.5 mM in stimulation buffer. At this concentration, IBMX does not reduce the signal in cAMP standard curves. The IBMX concentration may need further optimization in cell-based assays when working with different cell lines.

Q. Does DMSO interfere in the assay?
A. DMSO at concentrations up to 2% during cell stimulation does not affect assay performance. However, the DMSO concentration should be titrated for each cell line used.