Protein phosphorylation and dephosphorylation events are involved in the regulation of many aspects of the cell cycle, including proliferation, differentiation, secretion and apoptosis. Aberrant protein phosphorylation is a cause or consequence of many human diseases. As a result, kinases and phosphatases have become critical targets for drug discovery and this has prompted the development of many assay technologies suitable for high-throughput screening (HTS). LANCE® Ultra time-resolved fluorescence energy transfer (TR-FRET) reagents were developed primarily for detecting Ser/Thr and Tyr phosphorylation events. An extensive series of Europium chelate (Eu)-labeled anti-phospho antibodies were developed with their specific unphosphorylated ULight ™-labeled peptide counterparts. In the classical LANCE Ultra homogeneous assay set-up, peptide phosphorylation events cause an increase of the TR-FRET signal while kinase inhibitors lead to signal decrease.

In LANCE Ultra assays, Eu-labeled anti-phospho-target antibodies bind to phosphorylated ULight -labeled substrates, which brings Eu donor and ULight acceptor dye molecules into close proximity. Following excitation of the assay reaction at 320 or 340 nm, the energy from the Eu donor is transferred to the ULight acceptor dye which, in turn, emits light at 665 nm. The intensity of the emission output is proportional to the level of ULight -substrate phosphorylation. In LANCE Ultra phosphatase assays, peptide phosphorylation decreases over time, resulting in a reduced interaction between the Eu-labeled antibodies and ULight -labeled peptides. Phosphatase activity thus leads to TR-FRET signal decrease, while phosphatase inhibitors prevent this decrease in a concentration dependent manner. 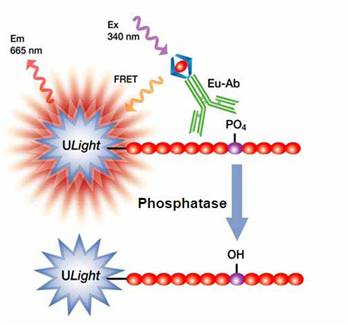 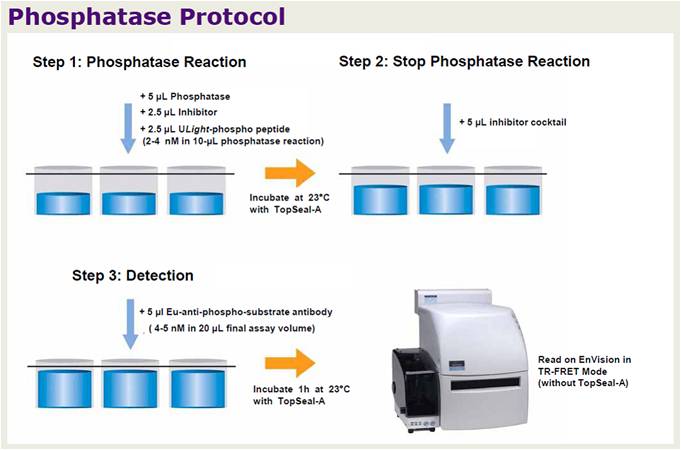 The data below are shown as proof-of-concept, and are intended to provide guidance on how you can optimize any LANCE phosphatase assay. Please note that the anti-phospho-Tau (Thr231) antibody used in these experiments is no longer available. However, PerkinElmer offers a variety of LANCE Europium-labeled anti-phospho antibodies as part of our product catalog that can be used to develop a similar phosphatase assay using a matching pre-phosphorylated ULight peptide substrate. Additionally, we offer LANCE Europium labeling reagents if you would like to Europium-label your own antibody. We also offer custom labeling services if you would like for us to Europium-label an antibody for you.

In phosphatase signal-decrease assays, initial enzymatic conditions are critical for the development of a sensitive assay. If the amount of labeled substrate is too high relative to the Eu-antibody concentration, small changes in phosphorylation may remain undetected. In phosphatase signal-decrease assays, ULight -phospho-peptide and Eu-anti-phospho-substrate antibody concentrations must thus be carefully titrated in order to allow detection of low levels of dephosphorylation.

Optimal concentration of TAU (pThr231) phospho-peptide was determined above using 5 nM Eu-anti-phospho-TAU antibody. Different amounts of total TAU peptides, including either 100% or 50% of phosphopeptide, were measured to evaluate the extent of signal decrease in samples containing 50% phospho-peptide (Figure 2). We wanted to determine which peptide concentrations would generate ~50% net signal reduction with 50% of phospho-peptide while yielding a high TR-FRET signal. Total concentrations of peptides ranging from 2 to 5 nM appeared suitable. As shown on Figure 3, a standard curve of TAU phospho-peptide was made by mixing 4 nM total of phospho and non-phospho TAU in different proportions with 5 nM of Eu-anti-phospho-TAU antibody. Excellent linearity was observed (r 2 value of 0.9950), indicating that these peptide and antibody concentrations are ideal for monitoring peptide dephosphorylation in a signal decrease assay. 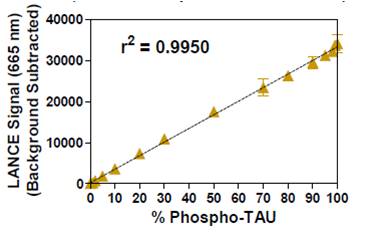 PP1A and PP2A assays were performed with ULight -TAU (pThr231), TOPOIIa (pThr1342) and 4E-BP1 (pThr46) peptides. Various enzyme concentrations were tested (Figure 4). Selected PP1A and PP2A concentrations are highlighted in the figure legend. The pattern of signal decrease was similar to the ones observed in assays using 32 P radio-labeled peptides, but the LANCE Ultra assays used much less enzyme (not shown). S/B ratios for the PP1A and PP2A phosphatase assays were of ~3 for ULight -TAU and TOPOIIa and ~8 for ULight-4E-BP1.

PP2A assay robustness was evaluated in a Z' factor analysis with the ULight-4E-BP1 and ULight-TOPOIIa phosphorylated peptides (Figure 7). Okadaic acid was used at a concentration inhibiting 100% of the enzyme activity (100 nM). Z’ factor was calculated using the PP2A (gold circles) and PP2A + Okadaic Acid (purple circles) data. Controls were the phospho- or non-phospho-peptides alone (open symbols). The two assays gave Z’ factors above 0.7.

A similar assay design was applied to measure TCPTP tyrosine phosphatase activity. JAK1 is reported in the literature to be a natural substrate for TCPTP. Figure 8 shows that TCPTP can indeed dephosphorylate the ULight -JAK1 (pTyr1023) peptide. For this assay, we used the generic Eu-labeled-PT66 generic anti-phospho-tyrosine antibody. Although signal decrease is observed, assay background is relatively high, indicating that further assay optimization might be needed. The amount of enzyme sufficient for this experiment is below one picogram per well. 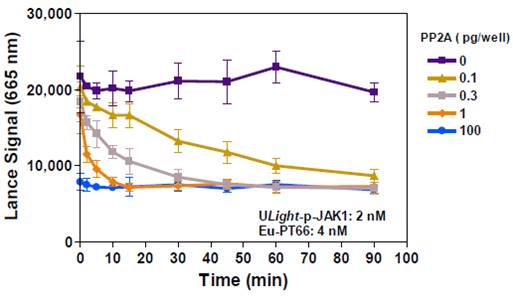 The IC50 values obtained for the inhibition of PP2A by okadaic acid were of the same order as that reported in the literature (IC50 value = 0.1nM). Average values obtained for P-4E-BP1 and P-TOPOIIa were of ~0.2 and 0.5 nM, respectively. These data suggest that the use of a variety of phosphorylated substrates might allow for pathway selective inhibitor screening. Preliminary work with the TCPTP/ULight -JAK1 (pTyr1023) assay shows that tyrosine phosphatase LANCE Ultra assays can be performed using a generic Eu-labeled anti-phospho-Tyr antibody, such as PT66.

Overall, our results demonstrate the LANCE Ultra technology is well suited for the development of robust and sensitive signal decrease phosphatase assays and for characterizing the effect of their inhibitors.

Posters and other resources