The LANCE® cAMP assay is a homogeneous time-resolved fluorescence energy transfer (TR-FRET) immunoassay designed to measure cAMP produced upon modulation of adenylyl cyclase activity by GPCRs. The assay is based on the competition between a Europium-labeled cAMP tracer complex and sample cAMP for binding sites on cAMP-specific antibodies labeled with Alexa Fluor 647 dye. The Europium-labeled cAMP tracer complex is formed by the tight interaction between biotin-cAMP and Eu-streptavidin.

When antibodies are bound to the Eu-streptavidin/biotin-cAMP tracer, excitation at 340 nm excites the Europium. The energy is transferred to the Alexa Fluor-labeled antibody. The fluorescence measured at 665 nm will decrease in the presence of cAMP from test samples, and resulting signals will be inversely proportional to the cAMP concentration of a sample (this is a competition assay) (Figure 1). The assay is intended for the detection of cAMP produced by cells or cell membrane preparations stimulated with GPCR agonists. 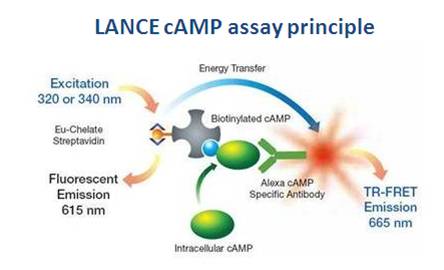 For Gs-coupled receptors, agonist stimulation of cells or membrane preparations results in an increase in cAMP levels, and a decrease in assay signal (competition assay). Addition of an antagonist will reverse the response, resulting in an increase in signal.

For Gi-coupled receptors, cells are simultaneously stimulated by the adenylyl cyclase activator, forskolin, and by the agonist. An agonist will inhibit the forskolin-induced cAMP production, resulting in an increase in signal compared to forskolin alone (competition assay). Antagonists will block the effect of the agonist, resulting in a decrease in signal toward forskolin-induced levels.

Required reagents available from various suppliers (see where PerkinElmer R&D gets these reagents):

The general protocol for the LANCE cAMP assay is summarized in Figure 2. Please refer to the manual for more-detailed information. 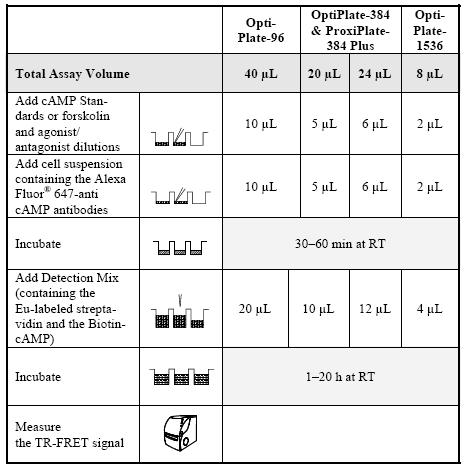 Q. Do I have to lyse my cells?
A. The Detection buffer contains a detergent (Triton X-100) that will lyse most cells.

Q. Do I need to use IBMX?
A. If you are using cells, yes. IBMX is a phosphodiesterase inhibitor and prevents the degradation of cAMP.

Q. Why am I using forskolin?
A. If you are studying a Gi-coupled receptor, you will be looking for a decrease in cAMP levels upon stimulation of your receptor. To raise the baseline levels of cAMP for unstimulated cells, you will treat all samples with forskolin. Forskolin stimulates adenylyl cyclase, which will trigger cAMP production. 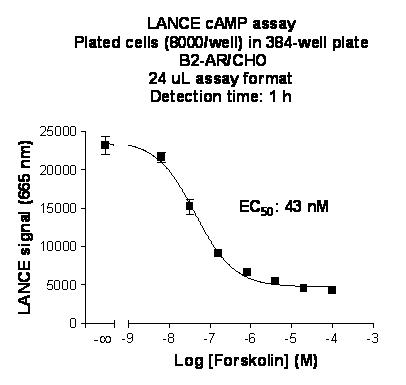 Figure 3. Adherent cell LANCE cAMP assay in B2-AR/CHO cells, 24 µL total volume. Twenty four hours prior to the LANCE experiment, the cells grown in a T-75 flask were detached. Cells were counted and plated in a CulturPlate™-384 from PerkinElmer (catalog number 6007680) at 8,000 cells/well with 50 µL of culture media. Since the CulturPlate-384 plate is opaque, 8,000 cells were also plated in clear-bottom Falcon 384-well plates in parallel to assess cell density and monitor growth. Approximately 70% confluency was attained on the experiment day. Protocol was as indicated in the manual.

Q. I think the biology will be more relevant if I treat my adherent cells when they are attached, rather than resuspended. Can I do this?
A. Yes. You can run the entire assay in a TC-treated plate. Plate your cells in a TC-treated microplate, add test compounds in stimulation buffer, and then follow the protocol as normal. See Figure 3 above.