Cathepsin K (Cat K) is a lysosomal cysteine protease expressed in osteoclasts, chondrocytes, and synovial fibroblasts and is involved in bone resorption and collagen degradation. Women with osteoporosis, breast cancer and bone metastases have high levels of Cat K and therefore, Cat K expression is a good marker for these diseases. In addition, researchers have been looking for inhibitors of Cat K for potential therapeutics. Cat K is also expressed by a broad range of other cell types including ovarian cells, colonic tissue, alveolar and bronchial epithelial cells, synovial fibroblasts, and macrophages.

Cat K 680 FAST was developed as an imaging tool for monitoring and quantifying Cat K activity. Cat K 680 FAST is an activatable agent that is optically silent upon injection and only produces fluorescent signal after cleavage by Cathepsin K. Cat K 680 FAST contains a human Cat K-cleavable sequence with a pair of self-quenching NIRF fluorochomes. In addition, a pharmacokinetic modifier was added to confer increased blood half-life. Disease status and progression can easily be monitored in vivo with this non-invasive agent. Cat K 680 FAST offers higher target specific signal with reduced background while also reducing the optimal imaging time after injection.

Figure 1: Cat K 680 FAST is comprised of a Cat K-specific peptide sequence flanked by two near-infrared (NIR) fluorochromes. It includes a pharmacokinetic modifier (PKM) selected to confer increased blood half-life. The agent is quenched (no fluorescence) until cleavage by Cat K when it becomes highly fluorescent. 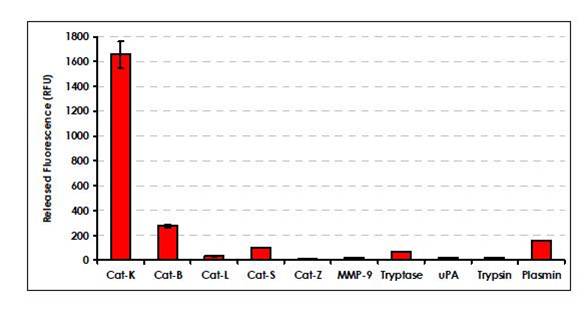 The recommended procedure for in vivo imaging with Cat K 680 FAST is administration via intravenous injection and imaging 6 hours post injection. Optimal imaging time is 6-24 hours after injection for Cat K 680 FAST depending on the model. 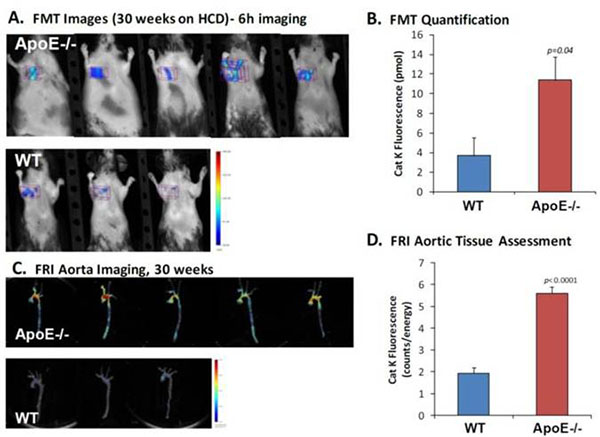 Figure 3: ApoE-/- mice were placed on a high-cholesterol diet for 30 weeks (n =5). These mice and the control mice (n = 3) were injected with 8 nmols per mouse Cat K 680 FAST and imaged by FMT 2500. A) The representative FMT 2500 images from control and apoE-/- mice. Images were taken 6 hours following injection and tissues were collected from perfused animals immediately. B) The quantification of FMT aortic arch region fluorescence from non-invasive imaging datasets (used optimal threshold to minimize background fluorescence). C) The corresponding ex vivo FRI images of aortic tissue (from the same mice). D) The corresponding ex vivo FRI analysis of aortic arch tissue, focusing the quantification on the aortic arch region only.

We have validated Cat K 680 FAST for use with fluorescence microscopes and flow cytometers. Here is a brief protocol with a recommended concentration of agent to use: 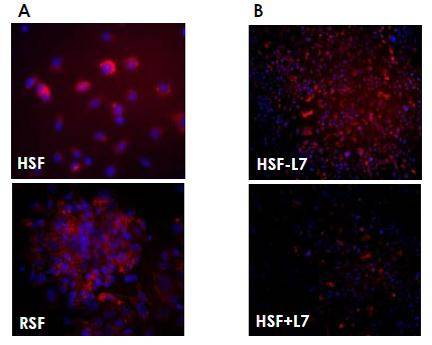 Figure 4: A) Cells (human synovial fibroblasts (HSF) from a patient with RA (upper) and rabbit synoviocytes (HIG-62) (lower)) were cultured in the presence of 1 µM Cat K 680 FAST for 6 hours. Cat K 680 FAST activation is shown in red and DAPI nuclear stain is shown in blue and the final magnification is 40x. B) As a control, HSF cells were pre-incubated in the absence (top) or presence (lower panel) of a specific Cathepsin K inhibitor (L7, 200 nM) for 1 hour before addition of the Cat K 680 FAST. The cells were cultured for an additional 6 hours and as shown in these panels, Cat K 680 FASTactivation is inhibited. The final magnification for these panels is 20x. 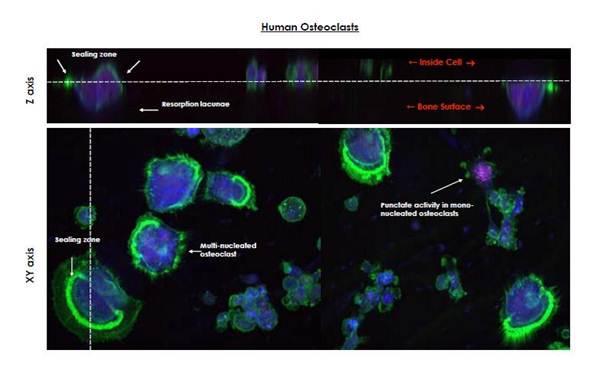 A. No, Cat K 680 FAST is intended for animal research only and not for use in humans.

Q. What is the difference between Cat K 680 FAST and the OsteoSense agents?

A. Cat K is useful in pathological models, such as Osteoporosis, where bone resorption and soft tissue calcification occurs. OsteoSense, on the other hand, specifically targets area of bone growth and loss. It does this by binding to hydroxyapatite, a major mineral product of osteoblasts and, thus, marker of osteoblast activity.

Please visit our Citations Library for references using Cat K 680 FAST on the IVIS or on the FMT.