Bombesin receptors (BBRs) play a role in a variety of physiological systems in mammals. Three characterized receptor types (BB1R, BB2R, and BB3R) are overexpressed in several prevalent solid tumors, including prostate, breast, small cell lung, and gastrointestinal cancers. The ability to detect expression of BBRs non-invasively in animal models of cancer has provided an important tool for biomedical research. There is a bombesin family of peptides that serve as ligands for these BBRs. When the BBRs are overexpressed, the bombesin peptides serve as autocrine growth factors, signaling either calcium mobilization or proliferation in tumor. Several radio-labeled analogs of these peptides have been used for PET or SPECT imaging in preclinical cancer research as well as in imaging of patients. Cytotoxic analogs of bombesin and bombesin receptor antagonists have been explored as novel therapeutics.

BombesinRSense™ 680 is a fluorescently-labeled peptide designed to bind specifically to bombesin receptors involved in cancer cell stimulation of proliferation. It is comprised of a 7-amino acid bombesin peptide analog, a near infra-red (NIR) fluorophore and a pharmacokinetic modifier to improve its plasma availability. This agent can be used to specifically target and quantify the upregulation of bombesin receptors (BBR) in vivo associated with tumor proliferation. Selectivity of agent binding was confirmed by blocking BombesinRSense 680-labeled human colorectal HT-29 cells with excess unlabeled native bombesin peptide.

BombesinRSense 680 has the potential to serve as an in vivo real-time early indicator of tumor growth and chemotherapy efficacy.

The generally recommended procedure for in vivo imaging with BombesinRSense 680 is administration via intravenous injection and imaging 24-48 hours post injection.

Instructions on setting up an in vivo mouse experiment with BombesinRSense 680 and imaging on an IVIS or FMT system. 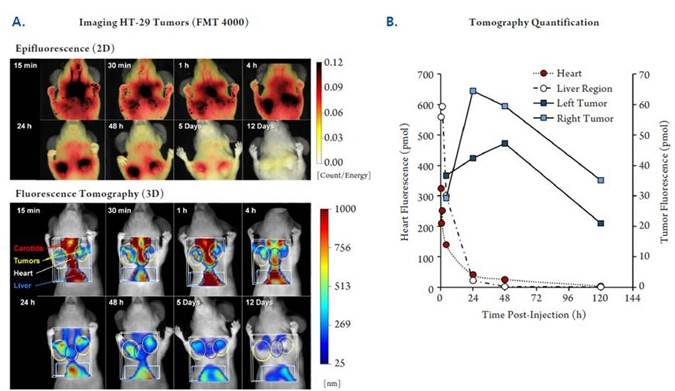 Figure 2: In Vivo Imaging: Time-course Optimization. NU/NU mice were implanted subcutaneously with human colorectal HT-29 tumors (2 tumors per mouse). When the tumors reached the desired volume, the mice were injected intravenously with 2 nmol of BombesinRSense 680 and imaged tomographically (FMT 4000) at times ranging from 15 minutes to 12 days. A) Shown is one representative mouse imaged at all time-points by both epifluorescence (upper panels) and fluorescence tomography (lower panels). B) Tomographic imaging datasets were used to quantify kinetic fluorescence changes in the upper liver region and the heart as well as targeted accumulation in the tumors. 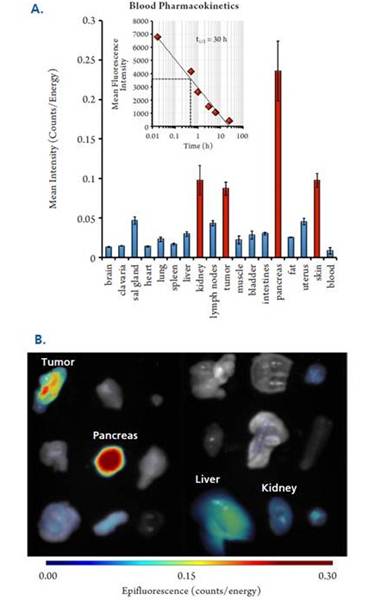 Figure 5a: Detection of BBR Expression in Frozen Tumor Tissue Sections. To assess binding specificity of BombesinRSense 680 (BRS 680),tumors were removed from HT-29-tumor bearing mice, and frozen sections (10 micron thickness) were incubated with 1 μM BombesinRSense 680 for 15 minutes at room temperature, with or without previous incubation (for 15 minutes at 37 ˚C) with 100 μM native bombesin. The tissue was rinsed and imaged by fluorescence microscopy with BombesinRSense 680 signal shown in red and DAPI (shown in blue) as a nuclear counterstain. 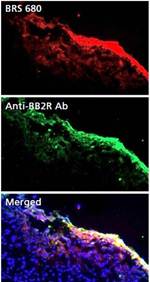 Figure 5b: Detection of BBR Expression in Frozen Tumor Tissue Sections. To confirm proper tumor localization of BombesinRSense 680 in vivo, HT-29 tumor bearing mice were injected with 2 nmoles of BombesinRSense 680. Tumors were excised 24 hours later and 10 micron sections were compared to serial sections stained with a rabbit polyclonal antibody against GRPR (BB2 receptor). Sections were imaged by fluorescence microscopy with BombesinRSense 680 signal shown in red and DAPI (shown in blue) as a nuclear counterstain.

We have validated BombesinRSense 680 for use with frozen tissue samples. Here is a brief protocol with a recommended concentration of agent to use:

We have validated BombesinRSense 680 for use with fluorescence microscopes and flow cytometers. Here is a brief protocol with a recommended concentration of agent to use: 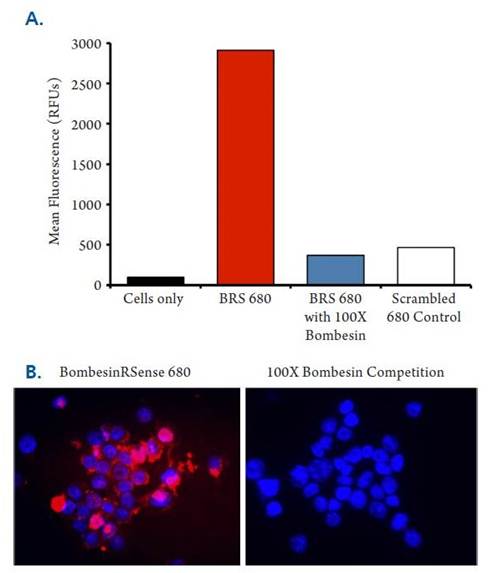 Figure 6: HT-29 cells were incubated with either 1 μM BombesinRSense 680 or a negative control agent (scrambled peptide) for 5 min at room temperature, with or without prior incubation with 100 μM of native unlabeled bombesin (15 min at 37 ˚C) to compete for binding. Cells were rinsed and imaged by both flow cytometry (A) and by fluorescence microscopy (B). Red signal is BombesinRSense 680 and blue signal represents DAPI nuclear counterstain.

Please visit our Citations Library for references using BombesinRSense 680 on the IVIS or on the FMT.