Angiogenesis is the process through which new blood vessels form from pre-existing vessels. It is fundamental for tumor growth, progression and metastasis. Destroying tumor vasculature and/or inhibiting neovascularization have become well-accepted cancer treatment strategies.

Assessment of tumor size by caliper measurements is the most commonly used noninvasive metric of drug efficacy in preclinical research models. However, more invasive approaches are required to understand the underlying biology and the early changes associated with a particular cancer therapy. For example, the use of anti-angiogenic agents in combination with measuring tumor volume will most likely underestimate the effects of the treatment. This is because decreases in vascularity generally precede any effects on tumor size.

Fluorescence imaging approaches have been developed to better detect and monitor cancer. AngioSense™ agents are fluorescent in vivo blood pool imaging agents. AngioSense agents are near-infrared labeled fluorescent macromolecules that remain localized in the vasculature for extended periods of time and enables effective imaging of blood vessels and angiogenesis.

The recommended procedure for in vivo imaging with AngioSense 680 EX or AngioSense 750 EX is administration via tail vein injection and imaging 24 hours post injection.

Figure 1: Optimal numbers of cultured Colo-205 tumor cells were implanted subcutaneously in the right flank of BALB/c nu/nu mice. After twelve days, tumors were measured using a conventional digital caliper, and mice were randomized (Day 0) into 2 groups of equivalent average starting tumor volumes. Compounds were formulated and injected intraperitoneally. Treatment with either vehicle or an anti-angiogenic agent (AAA) began on Day 0 and continued three times a week until Day 21. Mice were injected with AngioSense 680 on Day 0 or 20 and imaged 24 hours later on an FMT in vivo imaging system. Tumor dimensions were measured by caliper throughout the study and tumor volumes were calculated using the formula volume (mm3) = (length x width3)

Figure 2: Imaging of mice treated as shown in Figure 1. A) Maximum projection slices were taken at the same color gating of a scan from representative untreated (top) and AAA-treated (bottom) mice. B) The total amount of fluorescence (in pmoles) was determined (right, tomographic imaging) and compared to tumor volume (left, caliper). The total fluorescence decreased 77% within 24 hours after the treatment. A quantifiable therapeutic response was detected, whereas no effect on tumor size could be shown using standard caliper assessment. By day 21, tumor volumes were statistically smaller in the treated animals and there was a statistically significant reduction in fluorescence. The background fluorescence showed no observable differences over time (data not shown). 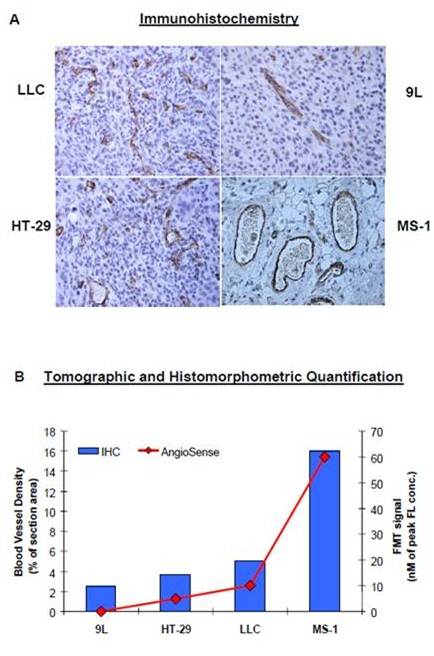 Figure 3: 9L, HT-29, LLC and MS-1 tumor cells were implanted in the right flank of BALB/c Nu/Nu mice. When tumors reached an approximate volume of 60 mm3, mice were injected with AngioSense 680 and imaged on the FMT 1 hour later. A) Immediately following imaging, mice were sacrificed and tumors were excised. Tumor sections were stained with anti-CD31 antibody and the % of positive area was calculated using the Zeiss Axiovision software. Note the strong correlation between FMT signal and vascularization (r2 = 0.9983). B) Fluorescent signal within each tumor was captured by drawing a 3D region of interest (ROI) around the appropriate tumor area, and results were reported as peak concentration (in nM).

Q. Can I use AngioSense EX agents in humans?

A. No, AngioSense EX agents are intended for animal research only and not for use in humans.

Q. I bought the AngioSense IVM previously, but I do not see it on your website.

A. We have discontinued the AngioSense IVM products.

Q. Can AngioSense be used to detect vasculature? If so, how long you should wait to image mice to view vasculature?

A. Our recommendation would be to image 30 min-1 hour after injection when the agent is high in circulation.

Please visit our Citations Library for references using AngioSense EX on the IVIS or on the FMT.