Acute Inflammation | Application Support Knowledgebase | Lab Products & Services | PerkinElmer
PerkinElmer uses cookies to ensure that we give you the best experience possible on our website. This may include cookies from third party websites. If you continue without changing your settings, we will assume that you consent to receive cookies from this website. You can change your cookie settings at any time. To learn more, please review our cookie policy, which includes information on how to manage your cookies.

The difficulty in studying inflammation in vitro increases the importance of robust and quantitative in vivo techniques to assess progressive inflammation and therapeutic intervention. In vivo imaging targets for acute inflammation include proteases and other mediators involved in the inflammation process; leukocytes, monocytes and macrophages that migrate to the injured tissue; macromolecules that accumulate in inflamed tissues due to increased vascular permeability; and the vasculature itself.

Our pre-clinical imaging agents fall into three main categories: Activatable, meaning they are optically silent until cleaved by a protease of interest; Targeted, meaning they bind to a receptor or other cellular membrane expressed in the disease of interest; or Vascular, meaning they localize to vasculature and are used to assess changes in vascular permeability. All three types of agents can be used to assess acute inflammation in vivo.  We also offer the cell labeling agent (VivoTrack™, see table below). Agent properties, protocols and instrument settings, can be found by clicking on the agent links below. All of our agents are compatible with FMT and IVIS imaging systems, provided your system has the capabilities to image the probes at the proper wavelengths.

When choosing an agent for acute inflammation studies, several factors should be taken into consideration:

Carrageenan paw edema
A model commonly used to study acute inflammation in mice is carrageenan-induced paw edema (CPE). Inflammation and swelling are induced by injecting carrageenan into the footpad of the mouse. Carrageenan elicits an inflammatory response by stimulating pro-inflammatory agents such as neutrophils which migrate to the site of infection, resulting in edema within the first 3-4 hours. At later timepoints (~24 hours), edema decreases as macrophages infiltrate the site of injection. For a protocol on how to prepare carrageenan for mouse injections, click here.
In the examples below, PerkinElmer’s NIR imaging agents can be injected either at 3 or 24 hours after the administration of carrageenan to determine the extent of edema and cellular inflammation non-invasively. Unlike traditional methods (i.e. caliper measurements of footpad thickness) which effectively represent the magnitude of the inflammatory response, these fluorescent agents provide quantification of specific biological processes—such as vascular leak associated with edema.

In Figure 2 below, paw thickness measurements at both early (2 hours) and late (24 hours) time points are compared to in vivo quantification of the vascular imaging agent AngioSense™ and the activatable imaging agents Neutrophil Elastase 680 FAST™ and Cat B 680 FAST™.

In Figure 3, AngioSense is used to assess vascular leak in the presence or absence of the anti-inflammatory steroid dexamethasone. 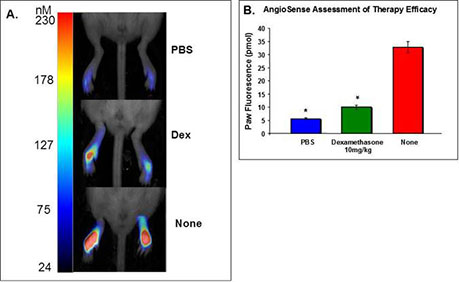 Figure 3: Assessment of Dexamethasone Therapy. Mouse hindpaws were injected with PBS, 10 mg/kg dexamathosone + 1% carrageenan, or 1% carrageenan alone. A) Tomographic images of three conditions. The fluorescent signal is represented as a maximum intensity projection (identical gains set for each mouse) of the 3D regions of interest established around each paw with quantitative color bars to represent fluorescence concentration (nM). B) Quantification of paw fluorescence for each of the three conditions. As expected, the steroid dexamethasone significantly inhibited the vascular response at 3 hours.

Please visit our Citations Library to view publications on acute inflammation and our preclinical imaging agents.