When choosing an agent for angiogenesis studies, several factors should be taken into consideration:

Asthma can be induced in female BALB/c mice by provoking specific immunity to ovalbumin in the lung.1 To do this, we immunized 6- to 8-week-old BALB/c mice on day 0 and day 14 by intraperitoneal injections of 50 μg of ovalbumin combined with 2 g of aluminum hydroxide as an adjuvant to enhance the allergic response. Between day 21 and day 24, mice received daily intranasal challenges with 100 μg of ovalbumin solubilized in PBS (pH 7.4) to focus an ovalbuminspecific allergic response within the airways. The allergic response to ovalbumin induces cytokines and immune factors typical of those in human asthma (for example, interleukin (IL)-4, histamine and IgE), a large influx of eosinophils and changes in airway hyperreactivity. To quantitate the inflammation associated with asthma progression, we injected the mice with 5 nmol of ProSense 680 agent at day 24, 4 hours after the final intranasal administration of ovalbumin. 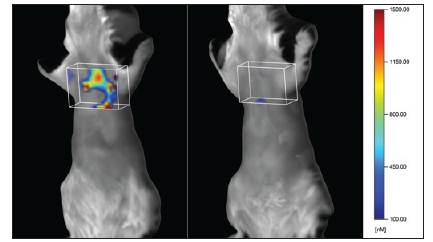 Figure 1. Noninvasive tomographic imaging of disease-associated protease activity in ovalbumin-induced mouse asthma. The asthmatic mouse (left) shows broad distribution of protease-activated ProSense agent fluorescence in the lung, with little fluorescence seen in the lung region of a control mouse (right). The box marks the region of interest established for analysis. 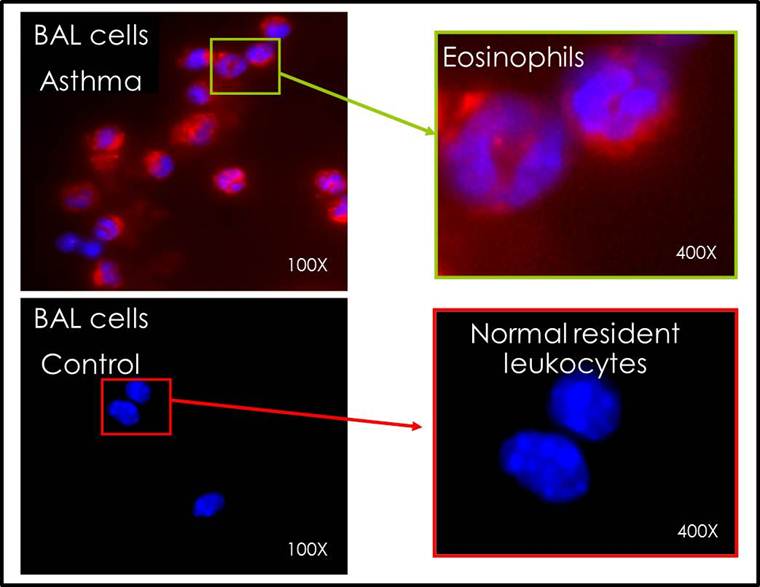 Figure 2. Tissue sections from the lungs of asthmatic mice demonstrated multiple areas of fluorescence localized to the lung parenchyma as compared to the minimal fluorescence detectable in the control lungs.

LPS Inflammation Protocol: LPS-induced lung inflammation is a simple model for cellular processes occurring in Chronic Obstructive Pulmonary Disease (COPD). On day 0, mice received intranasal injections of either 100 μg LPS solubilized in phosphate buffered saline (PBS) or PBS alone. Diseased and control mice were injected with ProSense680 or AngioSense 680 on day 1, 4 hrs after the intranasal administration of LPS. Mice were anesthetized, depilated to minimize interference with fluorescent signal, and imaged at 7 or 24 hrs, for AngioSense 680 and ProSense 680, respectively. 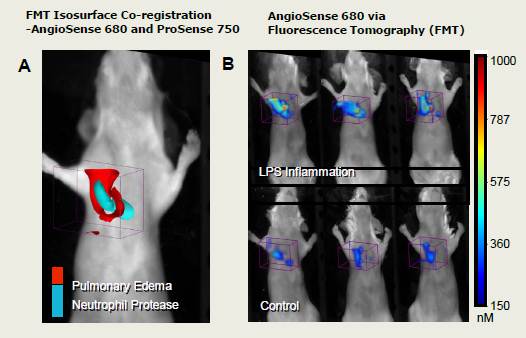 Figure 3. To assess the existence of edema caused by the inflammation of LPS in the airways, we used FMT imaging in combination with a vascular imaging agent, AngioSense 680. We performed multiplex imaging to compare the pattern of distribution (represented as colored, volumetric surface renderings) of AngioSense 680 to the highly characterized distribution that we have established with ProSense 750 imaging of neutrophilia (A). As expected, the sites of neutrophilia were spatially distinct from regions showing leakage of the vascular probe due to pulmonary edema; edema signal surrounded regions of more centralized neutrophilia. Representative mice are shown (n = 5 per group) to portray the consistent edema signal induced by LPS as compared to background signal in control animals (B). FMT quantified a 5-fold increase in total AngioSense 680 fluorescence in the lungs of LPS mice (> 130 pmol/lung) indicating increased vascular leak in the inflamed lungs as compared to those of control mice (< 20-30 pmol/lung and p<0.003).

Browse or search our PerkinElmer Citations Library for journal articles relevant to pulmonary inflammation and pulmonary disease in preclinical imaging.