ProSense on the ASK

Traditional mouse models of cancer rely primarily on ex vivo measurements of disease morphology and histologic analysis for the assessment of tumors. These measurements of disease may be distant from the actual biological targets of interest and can be time consuming, expensive, and impractical. By using NIR (Near-Infrared) in vivo imaging probes in combination with FMT, the biological processes that change with disease progression and therapeutic response can be visualized non-invasively over time.

Figure 1: Mechanism of ProSense activation. The ProSense probes are comprised of a pair of quenched fluorophore separated by a cleavable linker. Upon cleavage of the linker by the specific disease-related proteases, the probe becomes highly fluorescent. Therefore, the fluorescent signal is directly proportional to the expression and activity levels of the proteases.

The recommended procedure for in vivo imaging with ProSense agents is administration via tail vein injection and imaging 24 hours post injection.

Figure 2: A) Precise fluorescence localization of activated ProSense 680 is shown by FMT imaging. The non-invasive tomographic imaging is able to detect disease-related protease activity and accurate quantification of the internal distribution of this fluorescence in the lung. B) FMT measured a 5-fold increase in ProSense 680 fluorescence in the lungs of chronic obstructive pulmonary disease (COPD, asthma) mice (> 55 pmol/lung) as compared to those of control mice (< 10-15 pmol/lung). The FMT software precisely quantified the volume of the fluorescence within the lung regions of the mice to provide a measure of affected lung volume, showing approximately a 3-fold increase in COPD animals as compared to controls (~100 mm3 in asthma vs 30 mm3 in controls). Both the total fluorescence quantification (pmol) and the volume measurement (mm3) show high statistical differences in comparing asthma and control mice (p<0.0007 and p<0.002, respectively). 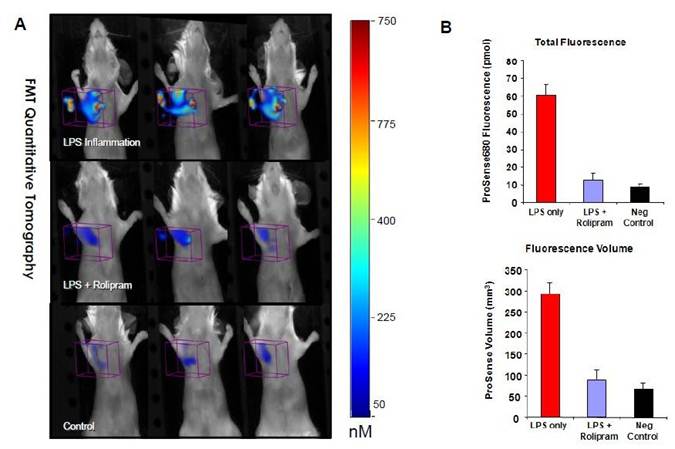 Figure 3: Rolipram (a PDE4 inhibitor) has been proven as an anti-inflammatory drug. To evaluate whether the effect of a PDE4 inhibitor on COPD treatment could be detected and measured non-invasively by FMT, mice were treated with Rolipram (2 mg/kg given intraperitoneally 24, 12, and 0.5 hours prior to intranasal lipopolysaccharide treatment (LPS), which induces inflammation). Control mice received injections of PBS. All mice were injected with ProSense 680 4hours after LPS treatment. A) FMT showed high fluorescence signal in untreated asthmatic mice compared to Rolipram-treated mice. B) The quantification of the therapeutic response in treated LPS-induced lung inflammation showed 92% inhibition of total ProSense 680 signal and 86% inhibition of fluorescence volume. 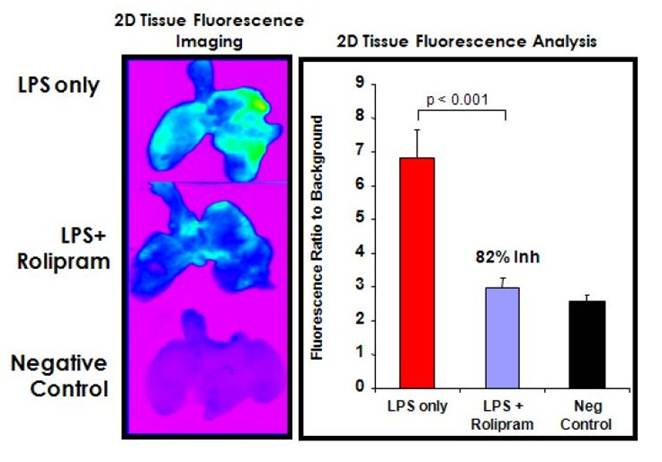 Figure 5: BAL cell differential analysis indicates the expected recruitment eosinophils (> 60% of the total cells) infiltrating the airways of asthmatic mice and no detectable eosinophils in control mice. A) Fluorescent microscopy of the BAL cells isolated from asthmatic and control mice that received intravenous ProSense 680 injection. This data shows ProSense 680 fluorescence is predominantly activated by eosinophils cells in the airways. B) BAL mononuclear cells in the same mice showed little or no fluorescence, whereas BAL cells from control mice (predominantly macrophages) showed minimal fluorescence. C) Tissue sections from the lungs of asthmatic mice demonstrated multiple areas of fluorescence localized to the lung parenchyma. Minimal fluorescence is detectable in the control lungs.

ProSense agents have been validated for use with tumor and inflammatory cells.

We have validated ProSense agents for use with fluorescence microscopes and flow cytometers. Here is a brief protocol with a recommended concentration of agent to use: 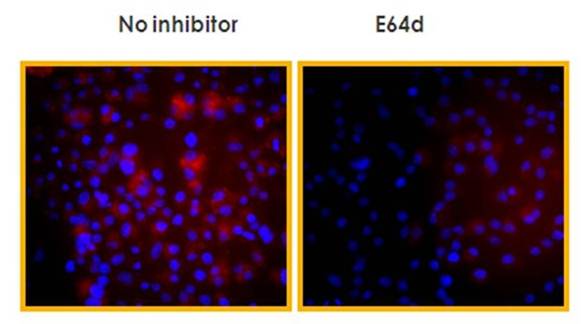 Q. Can I use ProSense be used in humans?

A. No, ProSense is intended for animal research only and not for use in humans.

Please visit our Citations Library for references using ProSense on the IVIS or on the FMT.