Hypoxia is a pathological condition where a region of the body is deprived of oxygen. Hypoxia can be associated with a variety of disease states, such as angiogenesis, pulmonary disease and inflammation. In addition, hypoxia occurs in tumors because the disorganized vascular networks cannot deliver blood borne oxygen. During hypoxia, carbonic anhydrase IX (CA IX), a cell surface enzyme, is induced and therefore, CA IX expression is a good biomarker for these disease states. HypoxiSense 680 is a carbonic anhydrase IX (CAIX) targeted fluorescent in vivo imaging agent that can be used to image CAIX overexpression in response to hypoxia. For example, HypoxiSense 680 detects the tumor cell surface expression of carbonic anhydrase 9 (CA IX) protein, which increases in cervical, colorectal, and non-small cell lung tumors. Pairing HypoxiSense with optical fluorescent imaging technology allows non-invasive imaging and quantitation of hypoxia-related changes in the cell in vivo. 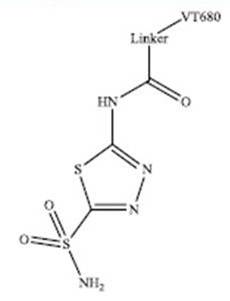 Figure 1: The CA IX targeted agent (HypoxiSense 680) was synthesized by coupling the NIR (near infrared) fluorochrome VivoTag-680 (VT680) to a derivative of the CA inhibitor acetazolamide.

View instructions on setting up an in vivo mouse experiment with HypoxiSense 680 and imaging on an IVIS or FMT system. 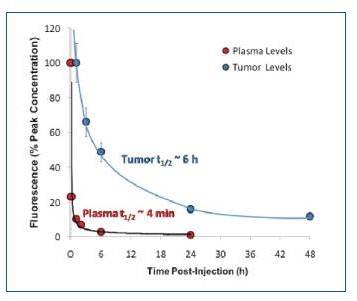 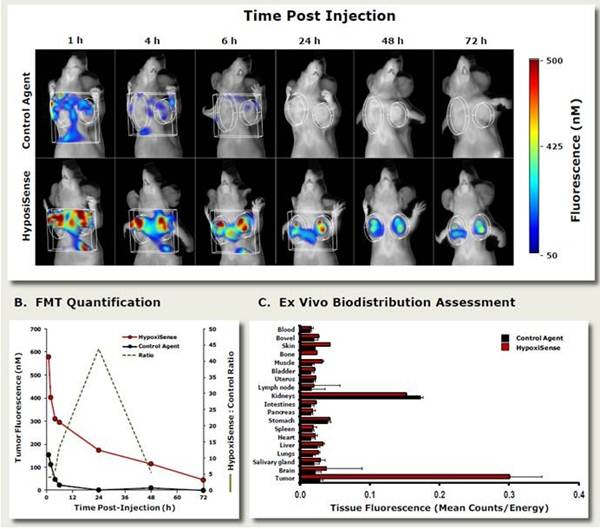 Figure 4: In Vivo Imaging. HeLa tumor-bearing mice were injected intravenously with 2 nmol of HypoxiSense 680 and imaged 24 hours after injection. Control mice were intravenously injected with unlabeled acetazolamide (AZ, 10 mg/kg) CAIX inhibitor one hour prior to agent injection to test for selective binding of HypoxiSense 680 to CAIX. A) 2D epifluorescence images of representative mice receiving HypoxiSense 680 with or without AZ inhibitor. B) 3D FMT imaging and quantification of tumor fluorescence in the same mice from panel A.

Figure 5: In Vivo Imaging. The effect of a hypoxic environment on HypoxiSense 680 signal in tumors was assessed in HeLa tumor-bearing mice. Mice with HeLa tumors were exposed to either normal air (~21% O2) or placed in a sealed environmental chamber containing only 8% O2. After 24 hours, all mice were injected intravenously with 2 nmol of HypoxiSense 680 and then imaged 24 hours after intravenous injection (continuing housing under either normoxic or hypoxic conditions). A) A 2D epifluorescence picture comparing the mice under the two conditions. B) A 3D FMT image and quantification of the tumor fluorescence of HypoxiSense 680 under the two different conditions.

Figure 6: Ex Vivo Imaging. To determine the tumor tissue localization of HypoxiSense 680 and a control agent, tumors were excised from HeLa tumor-bearing mice and fluorescence was assessed by microscopy. One hour prior to sacrifice, the mice were injected with pimonidazole (a gold standard method of labeling hypoxic tissue). Five minutes prior to sacrifice, the non-hypoxic tumor regions were visualized by injecting Hoechst perfusion agent. HypoxiSense 680 /Control (red); Hoechst (blue); Anti-Pimonidazole/Anti-CAIX Abs (green).

We have validated HypoxiSense 680 for use with fluorescence microscopes and flow cytometers.  Here is a brief protocol with a recommended concentration of agent to use:

A. No, HypoxiSense 680 is intended for animal research only and not for use in humans.

Q.Is HypoxiSense 680 an antibody or based on a metabolic reaction?

A. Neither, it is a modified version of the CAIX inhibitor acetazolamide.

Q. Has HypoxiSense 680 been used for frozen tissue labeling?

A. This has not been tested.

Q. Can HypoxiSense 680 be used with cells expressing GFP?

A. There should be no cross-reactivity between the HypoxiSense 680 and GFP. The Excitation and Emission wavelengths for these two fluors are far enough apart.

Please visit our Citations Library for references using HypoxiSense 680 on the IVIS or on the FMT.