Alpha SureFire® cellular kinase assays measure endogenous levels of phosphorylated cellular proteins (the "analytes") involved in various signaling pathways. PerkinElmer’s unique bead-based Alpha technology is highly versatile and can be used to study nearly any biological interaction using small molecules, large molecules, and binding partners of greatly disparate size. This unique technology has been combined with a new generation of cell-based, high throughput screening developed by TGR Biosciences, called SureFire®. The two technologies work together to provide a cell-based environment for assaying modulation of receptor activation and can also be used to measure responses of intracellular kinase inhibitors for drug discovery or fundamental research. For each Alpha SureFire kit, the phosphorylated protein is detected using sandwiching antibodies. One antibody is directed against a specific phospho-epitope on the analyte, while the other antibody is directed against another, non-phosphorylated, epitope on a distal part of the analyte.

Please note that some of the kits are detecting the "total" analyte content (i.e. detection of both the phosphorylated and non-phosphorylated forms of the analyte), to be used as a control or for normalization of the data acquired with the "phosphoprotein kits". 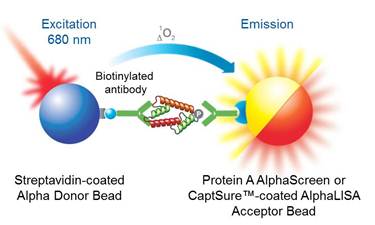 In the assay, cells are treated with agents known or suspected to trigger or inhibit phosphorylation of the analyte and then lysed. The lysate is then mixed with the Alpha SureFire reagents:

In an AlphaScreen® SureFire® assay, Donor beads are coated with streptavidin to capture a biotinylated antibody. AlphaScreen Acceptor beads are coated with Protein A to capture the second antibody (the biotinylated antibody is carefully selected so that protein A will not capture it efficiently). In the presence of phosphorylated protein, the two antibodies bring the Donor and Acceptor beads close together, generating signal. The amount of light emission is directly proportional to the amount of phosphoprotein present in the sample.

In an AlphaLISA® SureFire® Ultra™ assay, Acceptor beads are instead coated with a proprietary CaptSure™ agent that immobilizes the second assay antibody, labeled with a CaptSure™ tag. This eliminates potential interference from spiked antibodies and also results in better sensitivity and broader dynamic range. The emission wavelength of the AlphaLISA Acceptor beads is out of hemoglobin absorption spectrum, making it a better tool for working with tissue lysates.

Available from other suppliers:

Available from other suppliers:

View our listing of relevant products and catalog numbers. 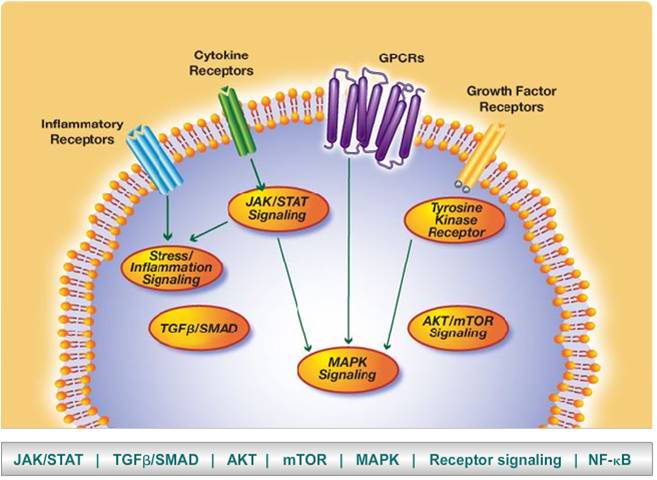 Alpha SureFire can be used to study the activation or inhibition of G-protein coupled receptors (GPCRs) or other cell surface receptors by measuring downstream phosphorylation events. For example, most GPCRs linked to the activation of Gαi/o proteins will activate the ERK MAP kinase pathway, resulting in a phosphorylation of the ERK1/2 proteins, which can be detected with the corresponding Alpha SureFire kit. Most GPCRs linked to the activation of Gαi/o proteins will activate the PI3K pathway as well, leading to phosphorylation of Akt proteins. Many Gαs- and Gαq-coupled GPCRs will also lead to ERK1/2 and/or CREB phosphorylation. In such studies, the analyte that will be examined with an Alpha SureFire kit is selected according to the transduction pathways that are modulated by the receptor of interest. Note that for a given receptor, the signal transduction may be different in different cell lines, and that the selection of the Alpha SureFire kit may need to be adapted to the particular cell line used in the study. Because of this, and because different cell lines may express different levels of the analyte protein, not all cell lines will respond the same way. Therefore, cell line selection is an important consideration when designing an assay. 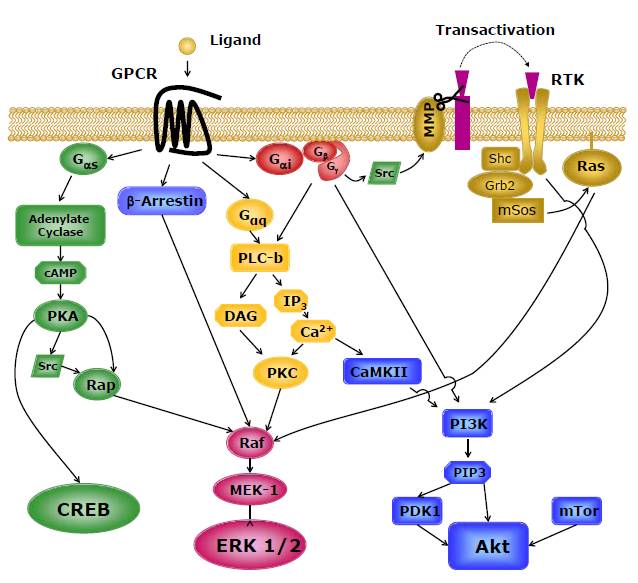 View our poster testing a panel of 80 GPCRs with the AlphaScreen SureFire pERK, pCREB, and pAkt kits.

Alpha SureFire kits can also be used to study activation/inactivation of other types of endogenous or recombinantly-expressed receptors by measuring downstream receptor-mediated signaling events. Examples include - but are not limited to - detection of the response of cells to insulin, PDGF, EGF, TNFalpha, stress pathway activating agents for example. Please refer to the "SureFire Validated Cells info" table for more detailed information.

Alpha SureFire can also be used to study signaling pathways and specific targets involved in signaling pathways. If you are interested in the activity of a certain kinase in a particular pathway, you can choose a downstream analyte to study. Alpha SureFire kits are named from the phosphorylated analyte being detected. As a control, you might also consider assessing the phosphorylation of an analyte upstream of your target of interest, as signaling pathways can be complex. You would typically use a couple of inhibitors, one targeting upstream of the kinase being studied, and the other targeting the kinase of interest. You would then compare how all of your tested compounds affect phosphorylation of the upstream and downstream analytes.

The Quick Guide to Alpha SureFire Assay Optimization has a detailed protocol that describes the first experiment we recommend you perform, complete with plate maps. There is a detailed initial protocol for adherent cells, and a detailed initial protocol for non-adherent cells. We recommend you run the relevant protocol, as written, for your first assay. You will be testing a broad range of conditions in a single assay, which will allow you to find optimal assay conditions quickly.

View more detailed information on each parameter. A number of parameters should be optimized for best results with this assay.

View detailed information on volumes to use when preparing buffer/bead master mixes when running between 50-500 wells. The tables list recommended volumes of each component, based on the number of assay points (wells) you will be using.

View a listing of selected Alpha citations, grouped by application.