AlphaLISA® epigenetics toolbox reagents were designed for the detection of specific methylation and acetylation marks on biotinylated-histone H3 peptide substrates (assay development using a full-length Histone H3 substrate is also feasible). Reagents that detect other post-translational modifications (such as acetylation of p53) are also available. In AlphaLISA assays, a biotinylated histone peptide substrate is used in a biochemical enzymatic reaction with a histone methyltransferase (HMT) or a histone acetyltransferase (HAT) enzyme. After the enzymatic reaction is stopped, the level of methylation or acetylation is determined using antibody-coated AlphaLISA Acceptor beads and streptavidin-coated Alpha Donor beads. The streptavidin Donor beads capture the biotin moiety on the peptide, whereas the antibody on the AlphaLISA Acceptor beads recognizes the specific epigenetic mark (acetylation or methylation). Alternatively, a biotinylated anti-Histone H3 antibody (specific to the C-terminus of Histone H3) can be used to capture full-length Histone H3 substrates on the streptavidin Donor beads. Upon laser irradiation of the bead complexes at 680 nm, short-lived singlet oxygen molecules produced by the Donor beads can reach the Acceptor beads in proximity to generate an amplified chemiluminescent signal at 615 nm. The intensity of light emission is proportional to the level of substrate modification. 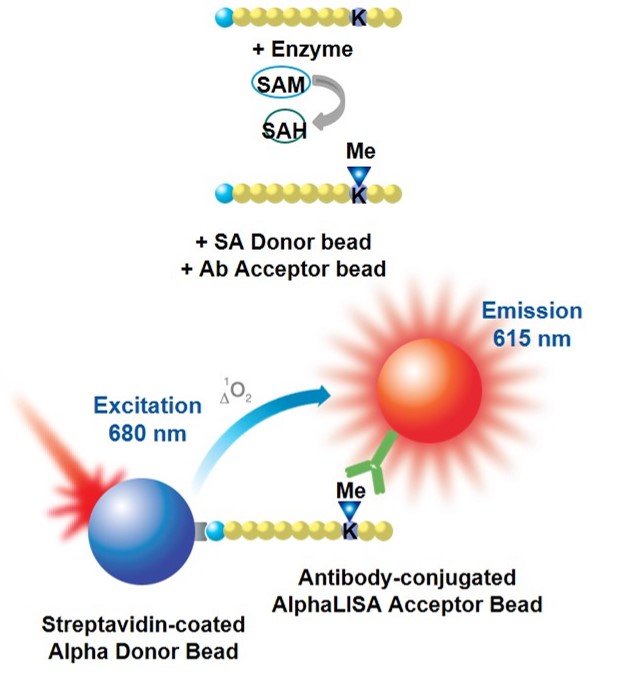 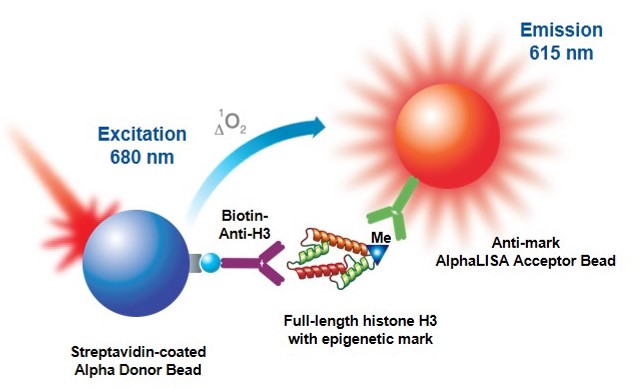 Figure 2. Assay principle using a full-length Histone H3 substrate. A biotinylated antibody specific to the C-terminus of Histone H3 is used to capture the substrate on the streptavidin Donor beads.

It is also possible to perform de-acetylation or de-methylation assays, starting with the appropriate modified substrates that can be detected by the antibody-coated AlphaLISA Acceptor bead and monitoring a decrease in signal as the substrate is de-acetylated or de-methylated.

Interestingly, deacetylase and demethylase assays can also be configured as signal increase assays. This is possible when an anti-non-modified residue antibody is available. Another possibility, only available for demethylase assays, is to use anti-mark antibodies that are specific against mono- or dimethylated lysine residues. With these type of antibodies it will be required to use a di- or trimethylated substrate and to carefully optimize the enzyme concentration and reaction time employed during the enzymatic step to be able to detect the (n-1) methylation state.

Currently, AlphaLISA Acceptor beads are offered for these epigenetic and post-translationally-modified targets:

Specificity of AlphaLISA-conjugated antibodies has been assessed in a detection assay using biotinylated peptides bearing different epigenetic marks. Please see examples in figures 3 to 5, below. Additional information can be obtained by contacting technical support. 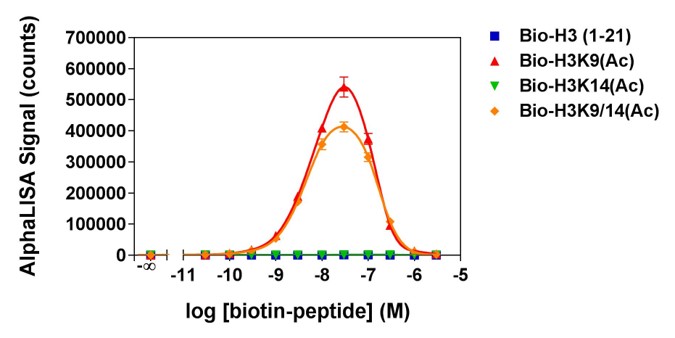 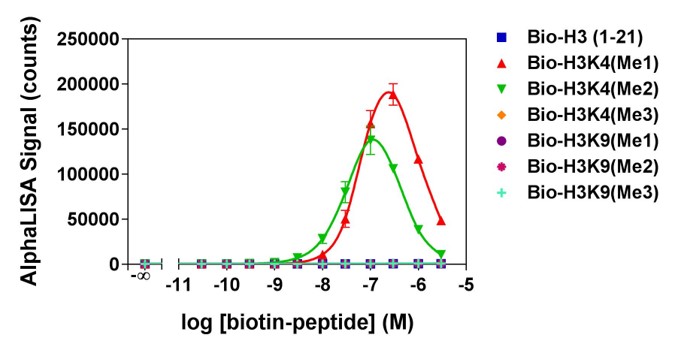 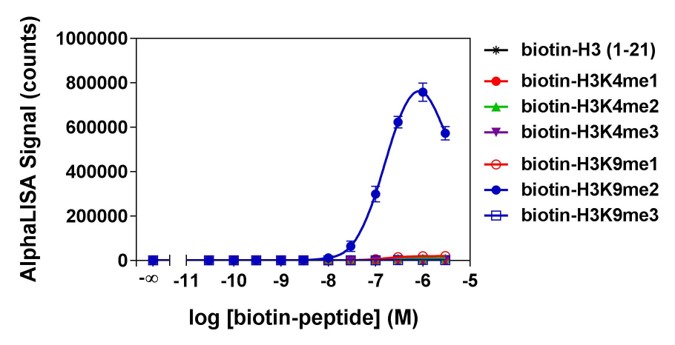 Custom beads may also be available upon request, and custom assay development services are offered through our OnPoint custom teams (contact information is at the bottom of this page). It is also possible to use our unconjugated beads and other bead products to develop your own assay.

Reagents available from AnaSpec or other suppliers:

Full-length recombinant Histone H3 substrate (Active Motif Cat. No. 31207), if you would like to develop an assay using a full-length Histone H3 protein rather than a biotinylated peptide substrate.

View our listing of all relevant Alpha products with catalog numbers.

Assays have to be optimized using your particular enzyme/substrate pair. Examples of assay development for a number of enzymes can be found in the format of Technical Notes. The example below describes the optimization of a p300 acetyltransferase assay using anti-H3K9ac Acceptor Beads (as found in the technical note).

This experiment is set up using increasing concentrations of enzyme where multiple wells are filled for each enzyme concentration allowing stopping the reaction at different time points. For subsequent assay optimization, you will want to choose a time and enzyme concentration providing for a linear increase of reaction product over time, conserving enzyme while still achieving good signal.

Keep in mind that if you are performing a methylation assay, stopping the reaction at the appropriate time could be critical as several of our LANCE Europium antibodies detect specific methylation states. For example, if a methylation reaction were to proceed for a too long time, substrate tri-methylation could occur (provided the enzyme used had that capacity), with an eventual loss of signal if the antibody was specific for the di-methylated residue. 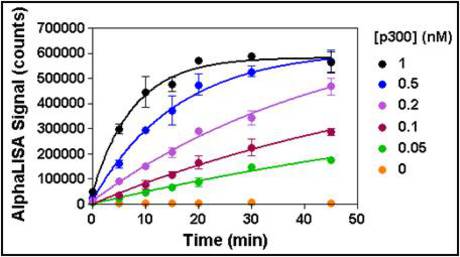 Figure 6. Enzymatic progress curves were performed by incubating p300 at concentrations ranging from 0.05 to 1 nM with 50 nM biotinylated H3 (1-21) peptide substrate and 25 µM acetyl CoA. A mix of Acceptor beads and anacardic acid was added to stop the reactions at the indicated times. Donor beads were added 60 min later and signal was read after 30 min. A 15 minute reaction time using 0.2 nM enzyme was selected for all subsequent experiments. 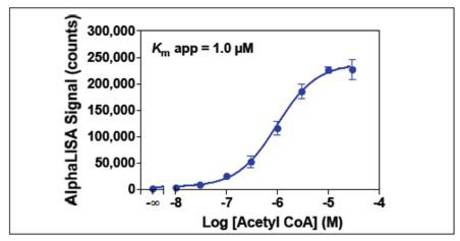 This assay can be used to characterize inhibitors for your enzyme, or as part of assay validation using a reference inhibitor if you will be screening. Increasing concentrations of inhibitor are tested at the enzyme concentration, time point, and cofactor concentration determined from the previous two experiments. An IC50 for the inhibitor can be derived from this data. It is important to note that if the compounds to be tested are dissolved in a solvent that is different than water (typically DMSO), its effect on the enzymatic reaction must be evaluated beforehand. 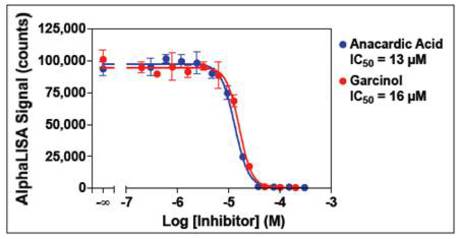 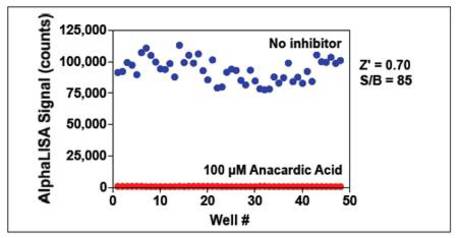 Tech notes, posters and other literature