Determining Kd With an Alpha Assay | Application Support Knowledgebase | Lab Products & Services | PerkinElmer
PerkinElmer uses cookies to ensure that we give you the best experience possible on our website. This may include cookies from third party websites. If you continue without changing your settings, we will assume that you consent to receive cookies from this website. You can change your cookie settings at any time. To learn more, please review our cookie policy, which includes information on how to manage your cookies.

Determining Kd With an Alpha Assay

The Kd of a protein-protein interaction may be determined with Alpha assays using one of two approaches: saturation curves or competition assays. Of these, competition assays are applicable to a wider range of assay conditions.

Saturation curves for determination of Kd

If the expected Kd is not below the binding capacity of the beads used in the assay, a competition binding assay must be used to determine the Kd for the protein-protein interaction. The reason for this is that the bead system will become saturated when the binding capacity is reached, and two competing equilibria will be occurring: excess protein will be dissociating the interaction between the two beads, decreasing signal (the hooking effect), while the excess protein may simultaneously be driving the interaction between the two proteins, increasing signal. The curve generated will be a composite of these two equilibria, once the binding capacity has been reached. This composite curve may appear to reach saturation, may appear to begin to hook (decrease) slightly, or may continue increasing without reaching saturation (depending on the actual Kd, the concentrations of proteins being tested, and the binding capacities of the beads used in the assay).

Symptoms that a saturation curve cannot be used to accurately predict the Kd:

Example data:
An excellent example of the use of saturation curves to determine Kd in an Alpha assay format is in a paper by Cassel et al. (2010). In this work, the Kd of the interaction between TAR DNA binding protein 43 (TDP-43) and biotinylated single-stranded TAR DNA and 6 TG repeats was determined to be 0.75 nM and 0.63 nM, respectively. Association and dissociation rates were also calculated and used to derive Kd values. In both cases, the Kd derived was consistent with previous reports using other methods. 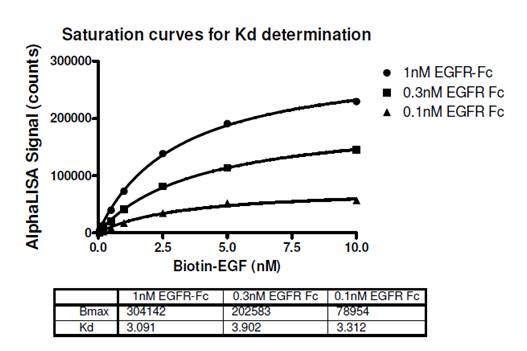 Figure 1. Saturation curve used to determine Kd of the interaction between biotinylated EGF and EGFR-Fc in Alpha format. View full protocol here. The expected Kd for this interaction is ~2.8 nM. This approach is generally suitable for low (sub-nanomolar) Kd values.

Example data where Kd cannot be determined by a saturation curve: In the data below, the expected Kd of the interaction between HDM2 and p53 peptide is ~ 0.3 μM. This is well above the expected binding capacity of the beads used in the Alpha assay, which is an indication that the saturation method should not be used to determine Kd; instead, a competition binding assay should be used. Based on the data below, the Kd would be incorrectly derived to be ~ 2 nM. (10 nM biotinylated-p53 peptide was used in the assay.) 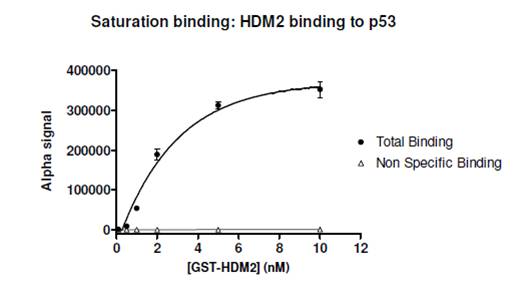 In many cases, a competition binding assay will need to be used to determine the Kd in Alpha format. This is because many protein-protein interactions have dissociation constants that are above the binding capacity of the beads. In the competitive binding assay, increasing concentrations of the untagged version of Protein X or Protein Y are used to displace the tagged reagent from the assay, disrupting the association between the beads (competition). The Kd value can then be calculated from the IC50 value based on a method introduced by Cheng and Prusoff: 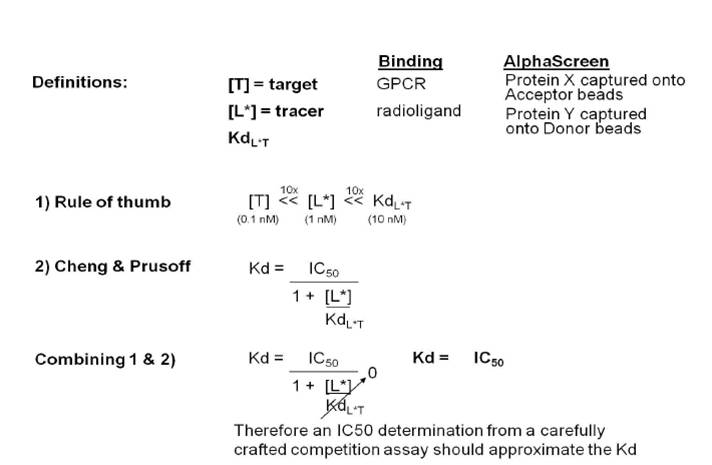 Cheng-Prusoff equation
The information above is written from the point-of-view of a receptor-radioligand binding assay. In an Alpha protein-protein interaction assay, the “target” becomes one of the tagged proteins being caught to the bead, and the “tracer” becomes the second tagged protein binding to the other bead. If the Kd is significantly higher than the concentration of either protein, the value for [L]/Kd in the Cheng & Prusoff equation approaches zero. The full equation then becomes Kd = IC50/(1+0), and the Kd approximates the IC50 in the competition binding assay.

In order to derive a Kd in this type of assay, a few criteria need to be met: 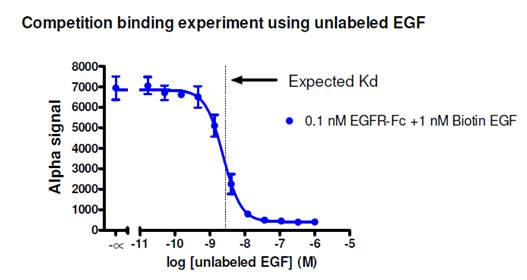 Figure 3. Competition binding assay to determine Kd for a biotinylated murine EGF/human EGFR-Fc protein-protein interaction. Streptavidin Donor beads and Protein A AlphaLISA Acceptor beads were used in this assay. Untagged EGF was titrated from 0.1 pM to 1 μM. The expected Kd is ~2.8 nM as determined by a radioligand binding assay (Lax, I. et al. 1988). Based on the data, the calculated IC50 is 2.4 nM. View protocol for assay here. 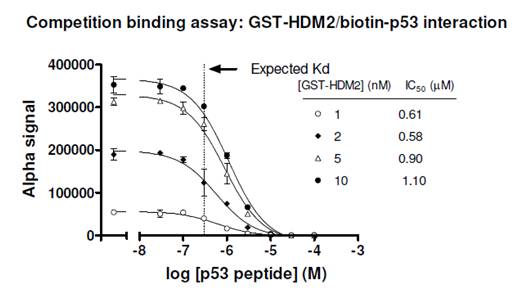 Figure 4. Competition binding assay to determine Kd for a biotinylated p53/GST-HDM2 protein-protein interaction. Streptavidin Donor beads and anti-GST AlphaScreen Acceptor beads were used in this assay. A few concentrations of tagged protein (GST-HDM2) were tested, and the IC50 values derived were fairly consistent. Untagged p53 was titrated from 30 nM to 100 μM. Concentration of biotinylated p53 used in the assay was 10 nM. The expected Kd for this interaction is ~ 0.3 μM (Dawson, R. et al., 2003). Compare to Figure 2, where data derived from a saturation curve erroneously gave a Kd of ~2 nM.

An excellent example of the use competition binding curves to determine affinity in an Alpha assay format is in a paper by Lazar et al., (2006). The IC50 of the interaction between three Fc variant antibodies and Fcgamma receptor was determined to be 380 nM, 60.3 nM, and 7.94 nM, respectively. These IC50s were in close agreement with SPR (surface plasmon resonance)-derived Kd values (252 nM, 30 nM, and 2 nM, respectively).

1The numbers provided are examples given to compare relative bead capacities, and are derived from probe titration experiments, as shown in the QC data on the product tech data sheets (http://www.perkinelmer.com/coa). The actual bead capacity for your bead system should be determined empirically for a given assay. The bead capacities given in this table are influenced by partner bead and the size of the probe used in these assays. The actual bead capacity will be influenced by size of the protein associating with the bead, as well as affinity of the protein (or antibody) for the bead.

2Protein A interacts strongly with particular subclasses of antibodies, including human IgG1, IgG2, and IgG4; mouse IgG2A and IgG2B; and rabbit, human and mouse total IgG. Protein A also has weaker affinity for other antibody subclasses. The affinity depends on the isotype and species of the antibody associating with the bead. Pierce has a nice chart that may be helpful.

3The bead capacity for these products refers to the capacity for antibody. The amount of protein you will then be able to bind to the antibody on the bead will be dependent on the affinity of your antibody for your protein and the size of your protein, and may range anywhere from 1 pM to 1 μM.

4Protein G binds to all subclasses of human IgG and mouse IgG. In addition it binds to rat, goat, sheep, guinea pig, rabbit, cow, pig and horse antibodies. Pierce has a nice chart that may be helpful.