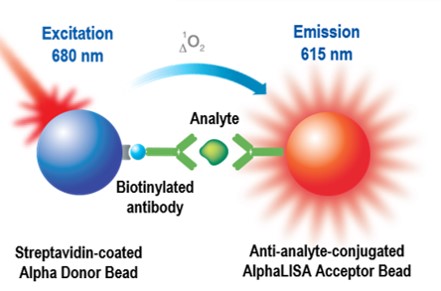 Principle of the AlphaLISA assay technology

PerkinElmer's Alpha technology includes both AlphaLISA and AlphaScreen assays. Both assays rely on the same Donor beads yet use different Acceptor beads (Figure 2). AlphaScreen Acceptor beads are embedded with three dyes: thioxene, anthracene, and rubrene. Rubrene, the final fluor, emits light detectable between 520-620 nm. In the AlphaLISA Acceptor beads, anthracene, and rubrene are substituted with an Europium chelate. The Europium (Eu) chelate is directly excited by the 340 nm light resulting from the conversion of thioxene to a di-ketone derivative following its reaction with singlet oxygen. The excited Europium chelate generates an intense light detectable within a much narrower wavelength bandwidth centered around 615 nm. In contrast to the AlphaScreen, the AlphaLISA emission is therefore less susceptible to interference by either artificial or natural compounds (such as hemoglobin) that absorb light between 500-600 nm (Figure 3). 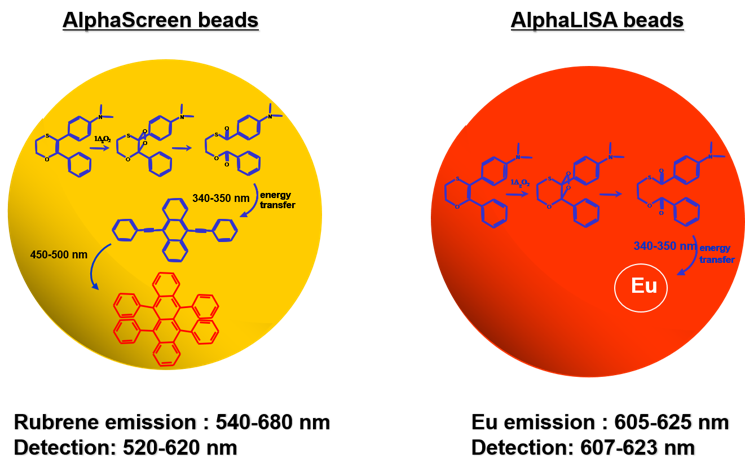 Figure 2. Difference between a TAR (AlphaScreen Acceptor) and a Europium (AlphaLISA Acceptor) bead.

Figure 3. Normalized spectra for AlphaScreen vs. AlphaLISA emission. AlphaLISA Acceptor beads give strong signal, are less prone to matrix interferences (hemoglobin), and are optimized for serum and plasma samples.

Create your own Alpha assay

The information in Create your own Alpha assay will help you design and develop any Alpha assay. The assay format can be an immunoassay using one antibody or a two-antibody sandwich, or it can be a protein-protein interaction assay using a tagged reagent as one or more of the assay components. Many other assay variations are also possible to develop.

View a listing of selected Alpha citations, grouped by application.

Alpha technologies require excitation at 680 nm and reading emission at 520-620 nm (for AlphaScreen) or at 615 nm (for AlphaLISA). A laser excitation source (rather than a Xenon Flashlamp) is usually needed, as an intense light source is required to generate signal. Many basic fluorescence plate readers are not equipped to run Alpha assays. We recommend using our EnVision® (with Alpha module), EnSight™, or VICTOR® Nivo™ Multilabel Plate Reader, each of which comes with pre-set Alpha settings. You can use the same generic instrument protocol for AlphaScreen and AlphaLISA assays. If you are using a plate reader from another company, we recommend that you check to see if the manufacturer has validated the instrument for an AlphaScreen or AlphaLISA assay. This information is usually found on the company's website. PerkinElmer has not validated other instruments, and we would recommend that you speak to the instrument manufacturer for information on the recommended settings to use.

If you are using an EnVision Multilabel Plate Reader, you may notice there are two instrument protocols for Alpha. One is the HTS Alpha protocol, and other is the standard Alpha protocol. The HTS Alpha protocol is to be used when you are performing high-throughput assays, and when the time it takes to read each plate is an important factor for you.

Q. What are TruHits beads used for?
A. TruHits beads are typically used as assay controls for Alpha assays. They contain streptavidin-coated Donor beads and biotin-coated AlphaScreen or AlphaLISA Acceptor beads, which should be able to interact on their own in the absence of other reagents. They can be used to determine whether a molecule or matrix interferes with an AlphaScreen assay, or to screen small molecule hits for false positives.

Q. How do Alpha assays compare to TR-FRET assays?
A. The AlphaScreen and AlphaLISA assay platform is much more flexible than TR-FRET. The AlphaScreen and AlphaLISA assay platform can allow for detection of analytes ranging in size from small molecules to large viral particles, with a maximum distance of 200 nm between the Donor and Acceptor beads. TR-FRET based detection systems do not have that flexibility. In addition, AlphaLISA assays can be run in serum or culture media, which can be problematic for TR-FRET assays.

Q. Can I use AlphaLISA assays for diagnostic testing?
A. Absolutely not. AlphaLISA kits are developed for research use only.

Q. Can the Alpha assay be automated for HTS?
A. Yes. No wash steps are required and low sample volumes can be used, so it is very simple to miniaturize and automate the AlphaLISA assay using the JANUS® Automated Workstation from PerkinElmer.

Q. How light sensitive are Alpha assays?
A. Streptavidin-coated Alpha Donor beads are somewhat light sensitive. AlphaLISA Acceptor beads are not light-sensitive. Direct sunlight and intense artificial light can activate Donor beads, releasing singlet oxygen that can react with streptavidin bound to the Donor-bead and decrease its efficiency. Inadvertent exposure to excess light levels can reduce signal strength but Im most cases the assay will still give good results. Ideally, steps involving Donor beads should be done under subdued laboratory light levels of less than 100 Lux (see table below). Alternatively, green filters (LEE 090 filters (preferred) or Roscolux filters #389 from Rosco) can be applied to light fixtures. Incubations of Alpha assays should be performed in the dark, with the microplate covered by our black TopSeal (Cat. No. 6050173), a second opaque microplate or lid, or sheet of foil.

Q. What is the difference between the various AlphaLISA buffers?
A. AlphaLISA Immunoassay buffer is used in most of the AlphaLISA kits in the market. In cases where high background is a concern, AlphaLISA HiBlock buffer is provided in the kit. The HiBlock buffer is also available separately. The AlphaLISA Immunoassay buffer is not a lysis buffer per se, but it does contain detergent and low salt, so it can be used to lyse cells in some assays. For membrane proteins, the AlphaLISA immunoassay buffer has been shown to be sufficient to expose the protein epitopes for AlphaLISA detection. Our AlphaLISA Lysis buffer (catalog number AL003) was developed specifically for use in cell-based assays. This buffer contains SDS in order to lyse the cells and solubilize the proteins. This buffer is required when detecting intracellular proteins. AlphaLISA Universal buffer is the buffer used to QC all AlphaLISA and AlphaScreen Toolbox beads. It is universal since all QC assays will work in it, but it may not be the optimal buffer for all AlphaLISA assays.

Q. Do I need to shake the plate before I read? How big are the Alpha beads and do they settle?
A. Alpha beads are small (250-350 nm diameter). They will not settle or clog pipet tips, and thus do not require shaking before a read.

Q. Can I conjugate my own antibody or use a fusion tag to bind my protein to the Acceptor beads?
A. Yes, we have optimized protocols, unconjugated beads, and many types of Donor and Acceptor beads coupled to secondary antibodies, or to glutathione or nickel chelate for capture of expression tags. We also provide a custom conjugation service. Please refer to Create your own Alpha assay for information on bead conjugation, and to Alpha products and catalog numbers for a listing of available catalog products.

Q. Why is the Immunoassay buffer so "bubbly"?
A. Our Immunoassay buffer is adapted for best detection of analytes in high protein concentration samples, such as serum or cell lysates. It is engineered for optimal immunocomplex formation while minimizing background. If dispensing is causing excessive bubbling, anti-foaming agents are available. Alternatively, a detergent-free buffer could be tested.

Q. How long are Alpha Donor and Acceptor beads stable once they are diluted in buffer?
A. Long term stability of diluted beads has not been evaluated. However, diluted beads will be stable for more than 12 hours, allowing automated screening and other HTS assays.

Q. Can RPMI media be used for AlphaLISA and AlphaScreen assays?
A. RPMI medium can be used for AlphaLISA assays. However, due to the presence of a high level of free biotin, a decrease in total counts and in signal:background ratio can be expected. Also, the presence of free biotin might affect the LDL (lower detection limit). In most cases, satisfactory results can still be obtained using RPMI medium. Increasing the concentration or the incubation time of the streptavidin-coated Donor beads can help to overcome the presence of biotin in RPMI media in some cases. Other cell culture media that work well in Alpha assays include DMEM and MEM.

Q. Do DMSO, SDS, EDTA, or sodium azide interfere with Alpha assays?
A. AlphaScreen and AlphaLISA assays can tolerate up to 10% DMSO, 0.02% SDS, 100 mM EDTA, and 0.005% sodium azide. Above these concentrations the signal will decrease, but acceptable results often can be obtained. Note that other components of your assay might not tolerate such concentrations (e.g. analyte & protein).

Q. What compounds in my library could interfere with the AlphaScreen or AlphaLISA assay?
A. Not all libraries are created equal. The main mechanisms of compound interference with the Alpha assay signal are by: 1) quenching the singlet oxygen, 2) competing against the interaction between biotin and streptavidin, and 3) acting as an inner filter. Strong singlet oxygen quenchers are transition metals (Fe2+, Fe3+, Cu2+, Ni2+, Zn2+, Al2+) when used in the µM range, anti-oxydants such as azide and ascorbate, compounds with structures based on thiophene (100 µM to 10 mM), and heme-containing transition metals (such as hemoglobin). Competitors of the interaction between biotin and streptavidin are biotin-like structures, while inner filters are compounds that will absorb light at 520-620 nm (emission) and/or at 680 +/-5 nm (excitation). Thus, blue/green compounds will act as inner filters. You can use our TruHits beads as a control, to test whether a compound is interfering in AlphaScreen format.