Working with Serum and Other Biological Matrices in Alpha Assays PerkinElmer
PerkinElmer uses cookies to ensure that we give you the best experience possible on our website. This may include cookies from third party websites. If you continue without changing your settings, we will assume that you consent to receive cookies from this website. You can change your cookie settings at any time. To learn more, please review our cookie policy, which includes information on how to manage your cookies.

Working with Serum and Other Biological Matrices in Alpha Assays

AlphaLISA® is a bead based assay technology that can be used for immunoassays in a microplate format. A key feature of this assay is that it is a homogeneous, or a no wash assay. This feature combined with its sensitivity and high throughput capabilities make Alpha an assay format choice for many research applications. As many researchers wish to apply this technology to samples containing serum, the below content will serve as a guide to optimizing this type of assay.

Some topics that will be considered include:

Both serum and plasma originate from whole blood. Plasma is richer than serum as it contains everything but cells, including fibrinogen and coagulation factors. Researchers may wish to harvest plasma and use agents such as heparin or chelators such as EDTA to prevent blood clotting. Both EDTA and heparin were shown not to affect the Alpha Technology. Serum is more stable and more uniform. Other biological fluids such as cerebrospinal fluid (CSF), bronchoaveolar lavage fluid (BALF), amniotic fluid (AF), saliva or urine are often used to measure biomarkers. Each of these fluids has a unique protein composition and will require specific validation. The goal of the document is to guide you through this specific validation approach.

Working with a complex sample such as serum or CSF may sometimes result in decreased assay sensitivity. However, in most cases, working with these biological matrices is successful if the appropriate procedures are followed.

There is a correlation between recovery and matrix. When the matrix for your standard matches the sample matrix, the percentage of recovery is better. Figures 1 & 2 illustrate matrix importance and percent recovery. It is important that the matrix should be as close to the sample as possible. 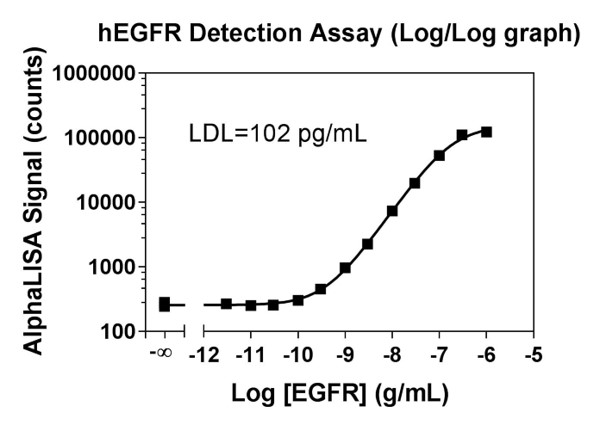 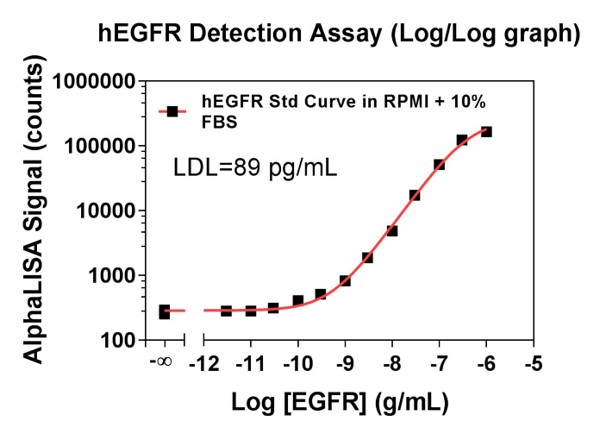 In a third experiment, a standard curve for human IL6 was performed in both IAB and FBS. The results are shown in Figure 3. 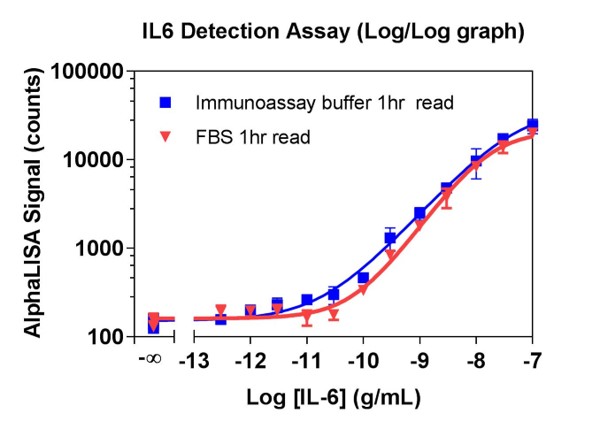 Figure 3. The human IL-6 standard curve was prepared and plotted in both immunoassay buffer and FBS. The curve in FBS shifted to the right, which indicates the reason for different percent recoveries in the different matrices.

There are several standard curve matrix options that can be used when working with serum samples in an Alpha format. These include:

Please refer to our application note regarding Analyte Depletion of Serum for AlphaLISA.

When working with serum or plasma, hemolysis is a factor to consider. Hemoglobin absorbs light in the same range as Alpha beads emit light, and can cause interference.

Figure 4 shows different wells with varying amounts of hemoglobin spiked in immunoassay buffer. Based on normal red blood cell (RBC) counts and hemoglobin content in a RBC, the spiked hemoglobin amounts were converted to the approximate hemolysis percentage of RBC. This is a visual representation comparing the amount of hemoglobin and the percent hemolysis in regards to well color. 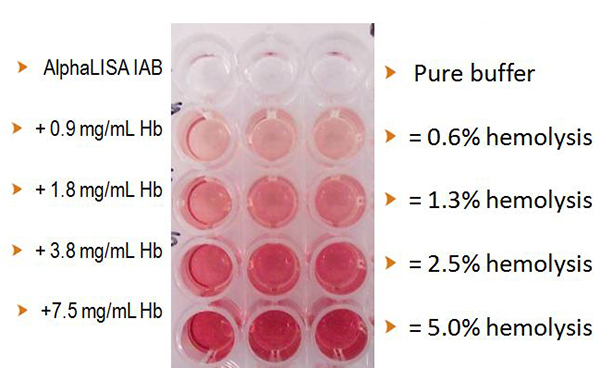 Figure 4. Comparison between the amount of hemoglobin added as it correlates to the percentage of hemolysis with an AlphaLISA assay.

In order to better determine the effect of hemoglobin on an AlphaLISA assay, a sample was spiked with increasing concentrations of hemoglobin and was measured using the Human Amyloid β 1-40 Immunoassay Kit. The assay was performed as stated in the manual using 5 μl of sample, 20 μl AlphaLISA Acceptor beads/biotinylated antibody and 25 μl of Donor beads.

For key AlphaLISA references where serum samples were used, please refer to the References and Citations section following.

Other components of a sample matrix can also potentially interfere with the assay. Interference may result from cross-reactivity of antibodies to a component in the serum sample, depletion of the spiked analyte, or variable levels of IgG, albumin or other proteins.

Serum often contains high concentrations of many components including: 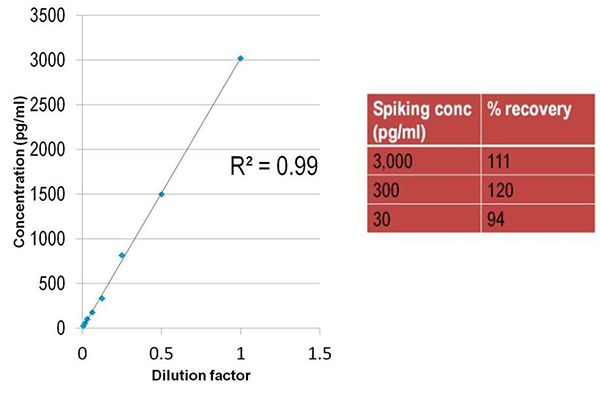 Figure 5. The good recoveries obtained for TNFα with a 1/2 diluted pooled serum as a matrix.

The above experiment was repeated using insulin instead of TNFα, as shown in Figure 6. 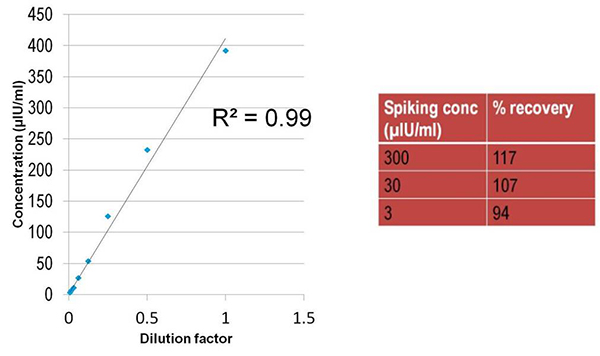 As we have previously mentioned, serum is made up of many biological components that could potentially interfere with an assay. When using serum samples with the AlphaLISA kits, dilutions may need to be made based on kit parameters. In most cases, potential interference issues can be resolved by diluting the sample or changing the assay buffer.

Identifying Diluents For Any Matrix

The assay was performed as indicated in the manual. The protocol is listed below along with the calibration curve for mouse MCP-1. 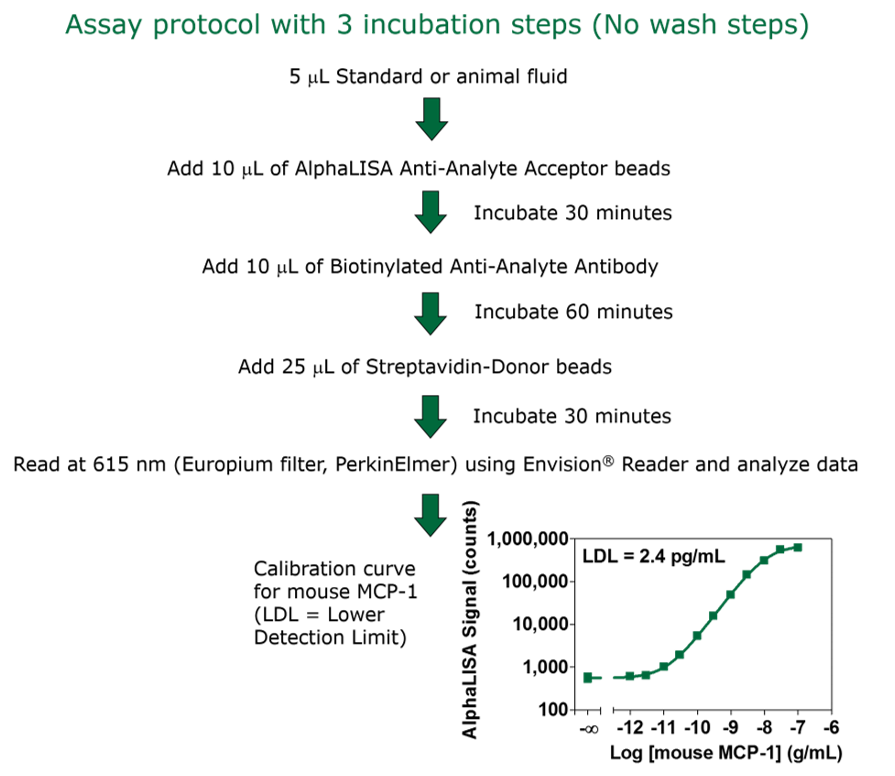 To begin assay development using a new matrix, one must first identify an appropriate matrix (or "diluent") for the standards. Linearity experiments and spike-and-recovery experiments were performed to assess whether each proposed matrix is suitable for these sample types. A protocol example may be found in the Application Notes and Poster section below. In Figure 7, the linearity of dilutions in five diluents for spiked mouse BALF (3 ng/mL mTNFα) were examined. 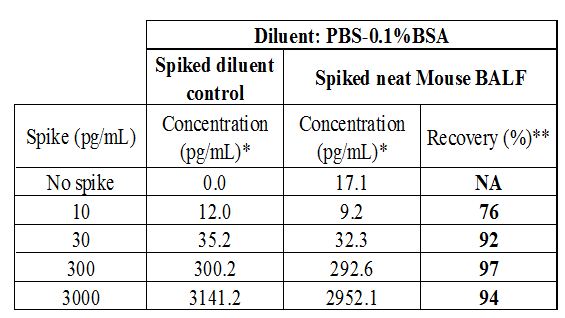 For certain sample types, dilutions may be required to achieve good linearity results. In another set of experiments, five diluents were examined for linearity when spiked with 3 ng/mL of mMCP-1 rat AF. In the below chart, the rat amniotic fluid required further sample dilution in order to achieve good linearity. This sample differs from the mouse BALF as shown in Figure 7 which did not require a 2x dilution for good results. It may be necessary to use dilutions to make the samples comparable to the sample being tested.

Good recovery (values between 70% and 130%) and linearity (no change upon dilution) are expected once the correct dilution has been determined. The Table 5 summarizes the recovery results obtained.

Not a single diluent gave acceptable results from the neat sample, but upon a 1:2 dilution, the two diluents with the best results are HiBlock buffer and PBS with 0.1% BSA, as highlighted by stable recoveries upon dilution and values close to 100%. The diluent showing the best spike-and-recovery was further examined. The concentration for 300-3000 pg/mL spikes is equal to the measured concentration minus the no spike value. The percent recovery is calculated by dividing the value in the sample by the value obtained in the spiked diluent control.

In summary, three cytokines were examined using various sample fluids and diluents. As seen in the below table, lower detection limits were determined along with dilution, spike range and physiological level measured.

Table 8. Physiological ranges of serum matrices as cited in literature.

While assay interference is not a general issue with AlphaLISA technology, there is potential that components in complex biological matrices may impact the measured values. The above information is meant to serve as an assay development guide for using Alpha technology with such complex matrices. The assay may require some optimization, including verification that the control matrix is as similar to the sample as possible, selecting appropriate diluent buffer, as well as optimizing the spiking concentration for accurate recovery determinations.

The key points to note when working with serum and other biological matrices in an AlphaLISA assay are as follows.