Post-translational modifications of histones and other proteins are increasingly recognized as key contributors to the complex network of cellular regulation. Acetylation and methylation of histone proteins act to regulate gene activation at the chromosomal level. Acetylated histones tend to lead to gene activation, whereas methylated histones tend to be associated with gene inactivation. The enzymes that mediate these histone modifications have become attractive targets for drug discovery, and specific and sensitive assays are needed for screening and characterizing potential inhibitors of these enzymes. These enzyme classes include histone acetyltransferases (HATs), histone deacetylases (HDACs), histone methyltrasferases (HMTs), and histone demethylases. The high sensitivity, dynamic range, scalability and resistance to fluorescent interference of AlphaLISA® sandwich assays make them an attractive option for such assays. In addition, the ability of Alpha assays to measure interactions over larger (200 nm) distances makes them interesting for analysis of nucleosomes or other protein complexes.

The addition and removal of small ubiquitin or ubiquitin-like proteins from target proteins provides another level of regulating protein activity post-translationally. The diversity of proteins involved in the ubiquitin ligation pathway (the E1, E2, and E3 classes) and the large number of de-ubiquitinases (DUBs) suggest that this regulatory mechanism is a promising area in which to find specific drug targets. A general AlphaLISA sandwich assay format can be applied to many ubiquitinated proteins. 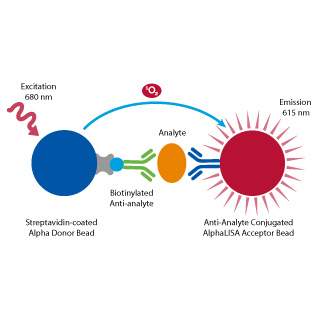 Virtually any target can be quickly and easily measured using Alpha technology, an improved alternative to quantitative ELISA assays and ELISA reagents. 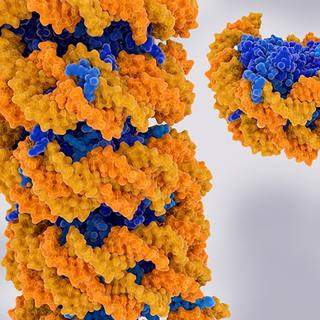 As the understanding of the role of epigenetic changes in various disease states advances, the need for high quality reagents that can rapidly identify and validate therapeutic molecules that target these enzymes is increasing. 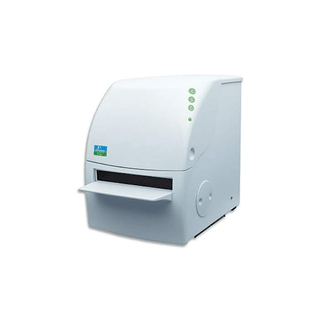 We know you are working hard to produce the next big breakthrough and the last thing you need to worry about is sub-par quality in something so commonly used, yet often overlooked as a microplate.

View more information on assays using AlphaLISA epigenetic toolbox reagents. AlphaLISA® epigenetics toolbox reagents were designed for the detection of specific methylation and acetylation marks on histone peptide substrates. In the Alpha assay, a biotinylated histone peptide substrate is used in an biochemical enzymatic reaction with an appropriate histone methyltransferase (HMT) or histone acetyltransferase (HAT) enzyme, using unlabeled S-adenosylmethionine (SAM) or Acetyl-CoA as a cofactor. When the enzymatic reaction is stopped, the level of methylation or acetylation is determined using antibody-coated AlphaLISA Acceptor beads and streptavidin-coated Alpha Donor beads. The streptavidin Donor beads capture the biotinylated substrate, and the antibody on the AlphaLISA Acceptor beads recognizes a specific mark on the substrate (acetylated Lysine 9 on Histone H3, di-methylated Lysine 9 on Histone H3, etc.). If the appropriate acetylation or methylation state exists on the substrate, the substrate will bring the Donor and Acceptor beads into proximity. Upon laser irradiation of the bead complexes at 680 nm, short-lived singlet oxygen molecules produced by the Donor beads can reach the Acceptor beads in proximity to generate an amplified chemiluminescent signal at 615 nm. The intensity of light emission is proportional to the level of biotinylated substrate modification.

View more information on our cellular epigenetic kits. AlphaLISA epigenetic cellular detection kits were designed to detect endogenous epigenetic modifications on Histone 3 in a no-wash, all-in-one well format. The kits contain a proprietary buffer set which has been optimized to isolate cellular histones and allow for their detection using Alpha technology. In AlphaLISA assays, the level of epigenetic modification is detected by a mark specific antibody which is coated on an Alpha Acceptor bead. A biotinylated anti-Histone H3 antibody (specific to the C-terminus of Histone H3) binds to Histone 3 and is then captured by streptavidin-coated Alpha Donor beads. Upon laser irradiation of the bead complexes at 680 nm, short-lived singlet oxygen molecules produced by the Donor beads can reach the Acceptor beads in proximity to generate an amplified chemiluminescent signal at 615 nm. The intensity of light emission is proportional to the level of modification present. 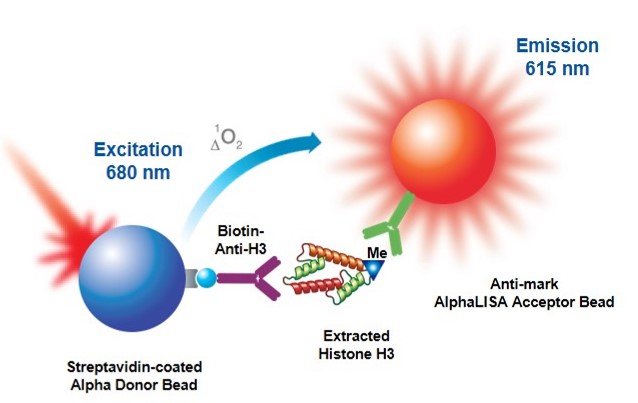 Creating your own AlphaLISA epigenetic assay

View more information on creating other types of epigenetic assays using Alpha technology. In addition to the acetylation and methylation assays mentioned above, other types of post-translational modification detection assays have been created using Alpha reagents to detect specific epigenetic marks on both peptide and full-length histone and protein substrates.