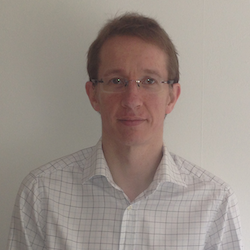 In 2011, Gustaf Sundberg joined Perten Instruments as a programmer, developing software for NIR spectroscopy instruments, specifically food quality and content analysis applications. Prior to his career there, Gustaf spent more than 11 years as a technology and management consultant, helping companies implement allocation, planning and inventory control systems to optimize their supply chains. One day, he decided he wanted more. He was looking to plant his roots at an organization where he could see his work more directly impact the lives of others and further advance his knowledge and expertise within emerging technologies.

Following PerkinElmer’s acquisition of Perten in 2014, Gustaf was given increased responsibility managing a team of programmers. In this new role, Gustaf led the development of a cloud-based system called “NetPlus Remote.” The program enables users to remotely monitor performance of NIR instruments, such as the Inframatic 9520 NIR Flour Analyzer, the Inframatic 9500 NIR Grain Analyzer and the DA 7250™ NIR Analyzer. This project was especially significant for Gustaf because he had always believed in the benefits of increasing connectivity across instruments and leveraging new technologies to simplify processes.

For instance, while studying computer science in the 1990’s, Gustaf became fascinated with the concept of artificial intelligence (AI). He tinkered around with it but was never able to apply the skills he learned to his day-to-day work, until he was invited to join PerkinElmer’s artificial intelligence innovation community in Waterloo, Canada. In 2017, he attended an AI workshop there and received training from NVIDIA, one of the market leaders in the area of AI and GPU computing.

Two years later, Gustaf returned to Waterloo, this time as a participant in PerkinElmer’s Visiting Researcher Program. There, he worked with a team of software engineers, computer science and engineering co-ops from the University of Waterloo, spectroscopy application specialists, and chemometrics scientists to develop a system that would determine moisture, protein and fat content of food samples such as corn, soybeans and wheat. This information is important for food customers, as it is used for process control and to help determine pricing. In just one week, Gustaf and the team successfully designed a method leveraging a subfield of artificial intelligence called transfer learning* that would empower customers to more quickly and accurately analyze food.

As a testament to his dedication to innovation, in 2018, Gustaf was recognized for his research on “Emerging Applications & Markets.” While he remains a strong believer in the power of connecting technologies, especially with the rapid pace of change happening in the world today, he sees incorporating machine learning into PerkinElmer’s solutions as imperative, “My goal moving forward is to identify ways to leverage the latest technologies to further increase the impact we can make for our customers.”

As he continues to develop in his role as a senior R&D manager, Gustaf still welcomes each challenge that comes his way and is inspired by the opportunity to help accelerate innovation even further at a mission-focused organization, “I value my work even more because I am able to develop products that are helping to improve the quality and safety of food for people around the world.”

* Gustaf and his team needed to create a model that could predict content levels in any given sample to then be referenced as a baseline for future samples. They decided to employ an artificial neural network which was trained using a vast number of samples from various foods. By leveraging transfer learning, which is a type of machine learning that transfers knowledge obtained from one problem domain to solve another, the team was able to re-use the representation learnt by the large amount of data previously collected and transfer the predictive strength into a new food sample. This ultimately increases efficiency and eliminates many of the samples traditionally needed to develop a predictive model.